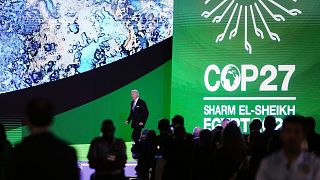 Decarbonisation was the topic of the day at COP27 in Egypt.

It also saw the arrival of US President Joe Biden at the climate summit, further protests inside the conference and revelations about methane emissions.

So what happened on the sixth day of COP27?

1. Fossil fuel emissions set to reach a record high in 2022

Fossil fuel emissions will reach a record high in 2022 and show no signs of decreasing, according to an analysis by the Global Carbon Project.

Though they dropped in 2019 due to COVID, the study- which brought together 100 scientists from 80 institutions - says they will climb “slightly above” pre-pandemic levels this year.

Emissions produced by burning fossil fuels will reach 40.6 billion tonnes in 2022, representing a 1 per cent rise on last year.

That leaves us with a 50 per cent chance that global warming will exceed 1.5C in the next nine years.

"This is the conjunction of two factors, the continuation of the post-COVID recovery and the energy crisis [sparked by the Ukraine war],'' Glen Peters, one of the report’s authors, told AFP.

The projection for major emitters was mixed, according to the report. Emissions are predicted to fall in China and the EU but will grow in the US and India.

2. Women in the Global South should be ‘leaders not victims’

They say that these movements - based in Indigenous communities and developing nations - are often “invisible” to funding bodies.

And, even when governments have put forward funding, it often doesn’t end up where it is needed most.

“Even where funding is reaching Indigenous, Afro-descendant, and local women’s organisations, it tends to be inadequate and short-term,” warns Omaira Bolaños, Director of the Latin America and Gender Justice Programs at the Rights and Resources Initiative.

It's a blind spot in global climate financing, the campaigners claim, and one that they want to fix.

3. Joe Biden takes to the stage at COP27

After missing the start of the climate conference due to the midterm elections in the US, President Joe Biden gave a speech at COP27 today.

He spoke about climate commitments against the backdrop of the Ukraine war.

“Russia's war only enhances the urgency of the need to transition the world off its dependence on fossil fuels,” Biden told a conference hall filled to the brim with attendees.

He also apologised for the US pulling out of the Paris Agreement, stating that rejoining was one of his first acts after becoming President.

Biden listed US commitments from plans to “unleash a new era of clean energy and economic growth” to forest preservation and a fund to help Egypt transition to clean energy.

“Today I can stand as President of the US and can say with confidence we will meet our emission reduction targets by 2030,” he said.

Several protesters stood up, whooped and held a sign during his speech but were quickly removed by security guards.

Biden also mentioned the urgent need to curb methane emissions. He referenced the Global Methane Pledge, a promise from more than 120 countries to cut methane emissions by 30 per cent by 2030.

It comes as the UN’s environment watchdog announced on Friday that it will launch a public database of global methane leaks detected by space satellites.

This greenhouse gas has a much higher warming effect than carbon dioxide during its short lifespan in the environment. Scientists say it is responsible for around a quarter of global warming so far.

The satellite system will spot methane leaks around the world and identify the company or government responsible. The information will then be shared with whoever is responsible in the hope that they find the leak and repair it.

If they don’t, the UNEP’s International Methane Emissions Observatory will release the information to a public database.

US Special Climate Envoy John Kerry said that this new alert and response system would be a “critical tool for helping all of us deliver on the Global Methane Pledge.”

5. Success at COP27 looks like loss and damage for vulnerable nations

Loss and damage continues to be the litmus test of a successful COP27 for developing countries and climate justice campaigners.

A talk at the Pakistan Pavilion featuring the country’s climate change minister Sherry Rehman this afternoon made clear why.

Visit Pakistan itself and you’ll see it, she said, “what happens when climate armageddon reaches your doorstep.”

Getting loss and damage - the crucial but elusive fund that would compensate and help climate-hit countries rebuild - on the agenda was a big breakthrough, said Dr Saleemul Huq.

Also speaking on the panel entitled ‘The Broken Bargain between the North and the South’, the tireless director of ICCCAD recognised that within the confines of negotiations, progress on this front is bound to be incremental.

But the success of this summit could be “so simple, one sentence: we agree to set up the Sharm El Sheikh loss and damage facility.”

Getting there will require careful diplomacy, said Rehman. Though she has repeatedly described the toll of the recent, record-breaking flood on her country, Pakistan’s top climate official held back in calling for ‘climate reparations.’

The term has divided countries along predictable lines and, she explained, “we should not be adversarial because that breaks the COP process down. It's the only multilateral [forum] we have.”

“I’d be the climate hero of the decade if I called for reparations,” she added, “but what service would it be doing to my country?”