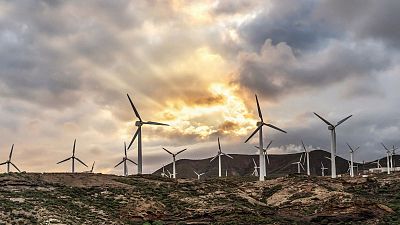 Making Europe climate-neutral could completely transform the economy and the way the EU trades with other countries, according to two international relations think-tanks.

The European Green Deal would change what types of energy we use, who we buy it from, what materials or technologies are imported, and put a tariff on carbon-intensive products.

But remodelling the economy in this way could have unintended side effects for countries that trade with the bloc, they warn.

The EU will have to become a "global standard-setter", encouraging other countries to take more action on climate change in order for the deal to succeed.

Compiling the report, its five authors looked at the impact of efforts to export climate policy, but also at the unintended side-effects. They also examined how other countries, like the US, China, Russia, Algeria and Saudi Arabia might understand the Green Deal and how they are likely to respond.

The #EuropeanGreenDeal is a landmark policy – but it also has profound geopolitical consequences. Today @ecfr & @bruegel launch a report on the geopolitics of the European Green Deal by @markhleonard@JyShapiro@pisaniferry@guntramwolff@Tagliapietra_S. https://t.co/gP13ny4fMr

The joint paper by the European Council on Foreign Relations (ECFR) and the Brussels-based economic think tank Bruegel has proposed seven actions that would provide foreign policy support for the European Green Deal.

These measures include actions like setting up a “climate club”, promoting global coalitions for climate mitigation and helping neighbouring countries that export fossil fuel adopt renewables that could be exported to the EU.

What is the EU Green Deal?

The Green Deal is a set of EU policy initiatives introduced in December 2019 for achieving climate neutrality by 2050. It also looks at strengthening Europe’s economic competitiveness and establishing the EU as a global leader in tackling climate change.

Goals include cutting the EU’s greenhouse gas emissions by at least 50 percent by 2030, scaling up the circular economy, and introducing carbon pricing to influence a shift in consumer and business behaviour.

Its targets extend into a variety of different sectors, including construction, biodiversity, energy, transport, and food.

“The European Green Deal is a proposal to transform the EU’s economy and put it on a sustainable footing," says Susi Dennison, the director of our European Power programme, leading ECFR’s work on climate change.

The deals three core commitments are: no net emissions of greenhouse gases by 2050, economic growth is decoupled from resource use, and no person and no place is left behind. She says to achieve them, they will need to be put into action with legislative and policy measures.

The International Implications of the Green Deal

The paper says the seven proposals respond to the geopolitical challenges that other countries are likely to face from the Green Deal and from increasing global warming more generally.

It claims to offer ways to leverage European efforts and expand the decarbonization push beyond the EU.

According to Dennison, the Green Deal will change the EU’s relationships with many partners, from "what types of energy it uses and who it buys it from; which raw materials and technologies it needs to import and from where; and what tariffs it puts in place on carbon-intensive imports."

But some of these changes are likely to have an adverse impact on the European Union’s trading partners. They will "inevitably respond to this changing picture, taking advantage of new opportunities but also putting in place competitive and sometimes hostile measures to redirect trade and investment flows," adds Dennison.

"This is why the EU has developed a smart foreign policy strategy to enable it to simultaneously deliver the Green Deal and continue to build its geopolitical clout."

Join some of these industry leaders, as well as European Commission Executive Vice-President for the European Green Deal Frans Timmermans for a virtual debate on Monday, 15 February at 14:00 CET, live on this page.

How is Europe transitioning to the green side?