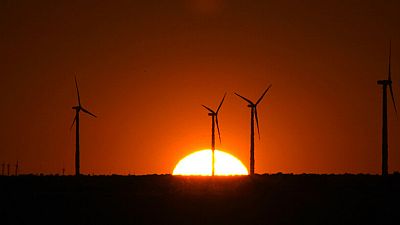 Record growth in renewable energy helped the EU avoid billions of euros in gas costs during the Ukraine war, according to a new study.

A quarter of the EU's electricity was generated by wind and solar from March to September - its highest-ever level, according to the report. But the bloc still spent an estimated €82 billion on fossil gas during this period, which supplied 20% of its electricity.

This growth in renewables meant more than eight billion cubic metres of gas was saved.

The UK consumed nearly 77 billion cubic metres of natural gas in 2021, up from 73 the previous year, to put this into perspective.

"Surging renewable electricity has helped protect Europe from an even worse energy crisis following Russia's invasion of Ukraine," he said.

Skyrocketing gas prices have fuelled record-breaking inflation this year, sparking a cost of living crisis across Europe and pushing other parts of the world to the brink of famine.

Inflation in the Euro area topped 10% in September, according to the EU statistical office.

Dr Rosslowe says that past policy choices had increased the EU's reliance on gas and held back renewable energies.

The report "brings into focus a lost decade in Europe," he says. "False confidence was placed in gas as a reliable bridge fuel, while it is clear now that a stronger drive for renewable energy would have made Europe significantly less vulnerable to energy blackmail."

"EU leaders must keep this lesson in mind," he adds.

EU energy imports from Russia since the start of the invasion topped €100 billion in September, according to the Centre for Research on Energy and Clean Air.

A big lift in ambition is needed

E3G, the climate think-tank which partnered with Ember for the research, said Europe needs to reduce its costly exposure to gas prices by doubling down on Brussel's RePowerEU initiative, a plan to wean the EU off fossil fuels.

"It is only by backing a big lift in ambition in building out more renewables and saving more energy [that we] will be able to offer people sustained relief and Ukraine sustained support to win against Russia," he added.