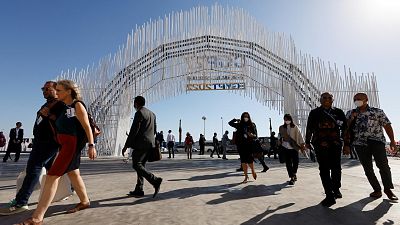 At COP27 on Tuesday, more representatives, heads of state and officials delivered speeches at the World Leaders Summit.

Tension is growing in Egypt over funding for loss and damage as the Global South calls on rich countries to pay for the impact of historic emissions. Revelations about the true cost of the climate crisis fueled the fire.

As debates continue over what is quickly becoming the main issue of the UN climate conference, here are the key takeaways from today.

1. Austria joins a handful of countries pledging funding for loss and damage

Austria joined a handful of countries that have officially pledged funds for loss and damage.

The country’s climate ministry told Reuters that it would provide €50 million to developing countries facing the unavoidable impacts of the climate crisis.

Just four other governments have so far done the same - Belgium, Denmark, Germany and Scotland. Other rich nations have resisted due to fears around their liability for historic contributions to global warming.

Compensation linked to extreme weather and global warming finally made it onto the agenda at COP27 this year.

And now Austria is breaking ranks to deliver on calls for loss and damage funding.

“The most vulnerable countries in the Global South are suffering particularly badly from the consequences of the climate crisis – and are rightly demanding more support from industrialised countries,” the country’s climate minister Leonore Gewessler said.

The Alliance of Small Island States says it is high time that fossil fuel companies are made to pay a “global carbon tax” on their profits.

“While they are profiting, the planet is burning.”

While they are profiting, the planet is burning.

Small island states are on the frontlines of the climate crisis, facing increasingly violent extreme weather and rising sea levels.

He pointed out that in the first half of this year just six fossil fuel companies alone had made nearly €70 billion in profits. That is more than enough money to cover the costs of major climate damages in developing nations, the Prime Minister added.

It was a proposition also mentioned by UN Secretary-General António Guterres during the conference’s opening ceremony.

“Those who contributed least to the climate crisis are reaping the whirlwind sown by others,” he said.

“[This is why] I am asking that all governments tax the windfall profits of fossil fuel companies.”

UN experts today released a report intended as a “how to guide” for net zero pledges.

Secretary-General António Guterres said that while there had been progress on these promises to cut emissions, there were “loopholes wide enough to drive a diesel truck through”.

It also highlights that often, existing rules mean figures don’t include all of the carbon emissions a company is linked to. Though they may present themselves as working towards net zero, polluting activities are being farmed outside of the firm instead.

Guterres added that “Using bogus ‘net zero’ pledges to cover up massive fossil fuel expansion is reprehensible. It is rank deception. This toxic cover-up could push our world over the climate cliff.”

“The sham must end.”

4. Global South will need almost €2 trillion a year by 2030 to finance climate action

Developing countries will need €1.98 trillion per year to cope with climate breakdown by 2030, a new report warns.

Released at the start of two weeks of negotiations in Egypt, its authors are calling for “immediate action”.

Lead author Nicholas Stern says rich countries should recognise that it is in their best interests “as well as a matter of justice” to invest in climate action in developing countries.

“Most of the growth in energy infrastructure and consumption projected to occur over the next decade will be in emerging markets and developing countries,” he says.

“And if they lock in dependence on fossil fuels and emissions, the world will not be able to avoid dangerous climate change, damaging and destroying billions of lives and livelihoods in both rich and poor countries.”

To avoid this, grants and low interest loans from the governments of developed nations need to double by 2025.

Half of the trillions needed to cope with climate breakdown could come from local sources but the rest has to come from outside contributors like rich nations and the World Bank.

5. Billionaires’ emissions are a million times higher than the average person

Oxfam has revealed that billionaires are responsible for generating a million times more emissions than the average person.

Research released by the international charity during COP27 shows that the investments of just 125 of the world’s ultra-rich lead to the emitting of 393 million tonnes of CO2 each year - the same as 85 million cars.

These few billionaires [combined] have ‘investment emissions’ that equal the carbon footprints of entire countries like France, Egypt or Argentina.

“The major and growing responsibility of wealthy people for overall emissions is rarely discussed or considered in climate policy making. This has to change.”

The charity goes on to say that billionaires’ actual emissions are likely to be even higher than this in reality. This is because public emissions declarations for companies tend to underestimate their carbon impact.

Oxfam believes that the world’s richest people need to be “taxed and regulated away from polluting investments that are destroying the planet”. It estimates that a wealth tax on billionaires could raise €1.4 trillion a year to help developing countries with the impact of the climate crisis.

Euronews Green will be publishing the five key takeaways every day from COP27. Check back in tomorrow for more.