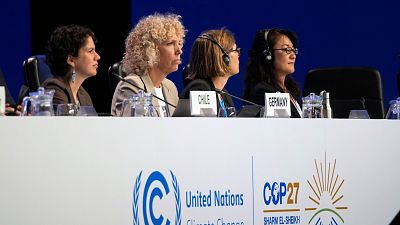 Men usually outnumber and outrank women negotiators in climate talks, except when it comes to global warming's thorniest diplomatic issue this year — reparations for climate disasters.

The issue of polluting nations paying vulnerable countries is handed over to women, who got the issue on the agenda after 30 years.

Whether this year's United Nations climate talks in Egypt succeed or fail mostly will come down to the issue called loss and damage in international negotiations, officials and experts say. It's an issue that intertwines equity and economics, balancing the needs of those hurt and those who would pay.

Nearly all of the key players are women and they and others say better gender representation could yield better results.

I think what we need at this crucial time is empathy.

"I think what we need at this crucial time is empathy ... We need to think about our world in the sense of taking care of our world," said Chilean Environment Minister Maisa Rojas.

"Maybe culturally, historically, they are seen as feminine values."

Rojas, a climate scientist, and Germany special climate envoy Jennifer Morgan engineered a last minute deal that got the issue of loss and damage on the agenda for the first time in 27 climate summits.

Now that it's on the agenda, the top people trying to get something meaningful done are women. And that provides hope, a top United Nations official said.

"At times, at least in negotiations, women are able to find a pathway forward where maybe high testosterone does not yield itself well to that," United Nations Environment Programme Director Inger Andersen said in an interview with The Associated Press.

"There are better results because women tend to be better in conflict resolution," De Camps said.

"They tend to be better in terms of reaching agreements, better in developing stricter policies that tend to be more sustainable."

Overall, in the climate talks, men still dominate, both in their total numbers and in holding top positions. The summit's president, the United Nations' climate chief, the UN Secretary-General and the top climate envoys for the United States, China and India are men, as are the overwhelming majority of heads of government who took the stage in the first week.

Christiana Figueres, who was a driving force behind the 2015 Paris agreement as the United Nation's climate chief, said that, while every generality has exceptions, women tend to be more long-term thinkers, more inclusive, and more concerned with justice than men are.

"We have a deeper sense of human justice and this is very much a justice issue," Figueres said in a Zoom interview Wednesday.

"So I'm not surprised that it is women who are taking the lead on both the political negotiations as well as the thought leadership on loss and damages."

"Women are on the cutting edge of the climate crisis," said German special climate envoy Morgan, a veteran of negotiations as an environmental advocate and former head of Greenpeace.

"We understand how we need to work together with others to find a solution. Especially the most vulnerable."

For women "it's not about egos, it is about finding the solution," said Preety Bhandari, a senior adviser on climate finance at the World Resources Institute.

The public faces of climate reparations are female

It's not just behind the scenes. The public faces of climate reparations are often female.

Barbados Prime Minister Mia Mottley, who is promoting her Bridgetown Initiative that expands the idea with reform of multinational development banks, and Scottish First Minister Nicola Sturgeon "have been fearless" in pushing for some kind of compensation system, said Bhandari.

Many of the youth advocates who push negotiators further with their criticism of inaction — including Vanessa Nakate and Greta Thunberg — are female.

"(Legislatures) around the world that have more women, have stronger climate action," said Katharine Hayhoe, The Nature Conservancy's chief scientist. "They did a study on it."

But it's not enough.

A United Nations report said that women made up 37 per cent of countries' delegations, and 26 per cent of leaders of delegations, in last year's summit in Glasgow. But among those younger than 26, 64 per cent were female. In the group of those aged 26 to 35, it was nearly half women.

I hope all of us women here can make a difference here this time.

Maldives Environment Minister Shauna Aminauth said she noticed that, when all the heads of state gathered at the beginning for pictures, called the family photo, they were nearly all male. But when it came to the people doing the work, that was more women and young people, like most of her delegation, she said.

"I hope all of us women here can make a difference here this time," Shauna said.

COP27: Mixed reactions over what climate summit did and didn't achieve