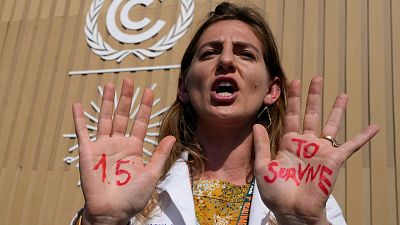 The UN has published the first draft of what could be the final deal to come out of COP27.

The 20 page document will form the basis of negotiations over the next few days as we move towards an agreement in Sharm El Sheikh. It is based on contributions and requests from almost 200 countries.

Though much of the text is likely to be reworked as talks continue, some have already criticised what has and hasn’t been included so far.

G20 leaders reaffirmed their pledge to keep the 1.5C Paris Agreement warming target within reach yesterday. And the draft “stresses the importance of exerting all efforts” to keep global warming well below 2C and pursue efforts to limit it to 1.5C.

Ahead of the Friday deadline, however, it still leaves many of the most pressing issues from COP27 unresolved.

What’s been left out of the draft text?

Yeb Saño, head of Greenpeace International’s COP27 delegation, says that the draft deal “pushes the pedal to the metal on the highway to climate hell.”

“We came to Sharm el-Sheikh to demand real action on meeting and exceeding climate finance and adaptation commitments, a phase out of all fossil fuels and for rich countries to pay for the loss and damage done to the most vulnerable communities within developing countries by agreeing a Loss and Damage Finance Fund.”

None of that, he says, is on offer in this draft.

Last year at COP26, the Glasgow Climate Pact called for countries “to accelerate measures towards the phase-down of unabated coal power” as well as “phase out and rationalise inefficient fossil fuel subsidies.”

At this year’s conference, India, the US and the EU requested that this be updated to include a phase-down of all fossil fuels - something that has not been included in this draft text.

It also doesn’t include details about creating a fund for loss and damage. It is a request that has become a key measure of the success of COP27 for many vulnerable nations after talks on creating a fund were included on the agenda for the first time this year.

Anything less than establishing a loss and damage fund at this COP is a betrayal.

“Anything less than establishing a loss and damage fund at this COP is a betrayal of the people who are working so hard to clean up this environment, and the people fighting for humanity,” Environment Minister for Antigua and Barbuda Molwyn Joseph told reporters in Egypt.

The COP27 deal still needs ‘a tremendous amount of work’

“We are not in a position today that this is enough common ground that we could agree upon,” he added.

Timmermans said that the EU will continue discussions and give input in the hope that common ground can be found before the end of COP27.

Is COP27 going into overtime?

But experts are now saying it looks likely that talks will go beyond the Friday deadline as countries struggle to agree on what should be included.

They told him that “there are still a lot of gaps remaining” in the draft text and that pledges made by G20 leaders in Indonesia this week should be “the baseline, not the ceiling”.

“The last thing anyone wants is for this COP to end without consensus,” they said, according to Sharma’s office.