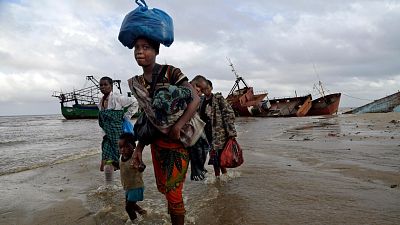 Displaced families arrive after being rescued by boat from a flooded area of Buzi district, Mozambique after cyclone Idai in 2019.   -   Copyright  P Photo/Tsvangirayi Mukwazhi, File   -
By Euronews  with Reuters  •  Updated: 08/11/2022

Compensation linked to extreme weather and global warming has leapt up the political agenda at the UN climate conference taking place in Sharm el-Sheikh, Egypt.

Under pressure from developing nations, countries have agreed to hold their first formal talks on loss and damage, shorthand for cash rich polluters would pay to poorer states facing unavoidable damage from worsening floods, drought and sea level rise.

Just four other governments - Belgium, Denmark, Germany and Scotland - have committed small amounts of loss and damage funding, breaking ranks with other rich nations that have resisted such payments for fear of spiralling liabilities for their outsized contribution to causing climate change.

Austria will provide at least €50 million to tackle loss and damage over the next four years, the climate ministry said.

The funds could support the "Santiago Network", a UN scheme providing technical support to countries faced with damages from climate-fueled natural disasters, and a programme providing early warning systems to countries prone to extreme weather.

The most vulnerable countries in the Global South are suffering particularly badly from the consequences of the climate crisis – and are rightly demanding more support from industrialised countries.

"The most vulnerable countries in the Global South are suffering particularly badly from the consequences of the climate crisis – and are rightly demanding more support from industrialised countries," climate minister Leonore Gewessler said.

Austria to provide an extra €10 million for climate finance

Gewessler said Austria would also add another €10 million to this year's budget for climate finance.

"Austria is taking responsibility," she said.

Climate campaigners have said, however, that the trickle of one-off commitments is no substitute for consistent support.

So far, the amount pledged falls far short of the billions of dollars in losses already suffered by vulnerable countries hit frequently by extreme floods, drought and storms.

Cyclone Idai caused some €1.4 billion in total damage and €1.39 billion in losses when it struck Mozambique in 2019. Some research suggests that by 2030, vulnerable countries' climate-linked losses could reach €580 billion per year.

Developing countries want countries to agree at COP27 to launch a funding facility, dedicated to loss and damage. The United States and 27-country European Union - of which Austria is a member - have previously opposed the idea.

Every country announcing funding for the loss and damage from human-induced climate change is most welcome.

Saleemul Huq, an adviser to the Climate Vulnerable Forum group of 58 countries, welcomed Austria's funding, saying the forum expected Austria and others to support a deal on a dedicated loss and damage fund at COP27.

"Every country announcing funding for the loss and damage from human-induced climate change is most welcome," he said.