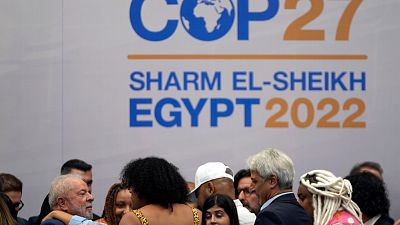 There are just 24 hours to go until COP27 is scheduled to end.

But, with a draft deal published today, there are still a number of issues that remain unresolved. From loss and damage to demands for a full fossil fuel phase down, delegates have pointed out gaping holes in the agreement.

So what happened on Thursday in Sharm El Sheikh?

Today the UN published the first draft of the COP27 climate deal. It is based on requests from the delegates of nearly 200 countries.

Much of it is likely to be reworked as negotiations continue over the next few days but this is the first indication of what may be included in the final text.

It “stresses the importance of exerting all efforts at all levels to achieve the Paris Agreement temperature goal” as well as “pursuing efforts to limit the temperature increase to 1.5C”.

But it didn’t include a pledge to phase down all fossil fuels - something that had been asked for by India, the US and the EU.

A plan to create a fund for loss and damage wasn’t in the text either, despite reparations being big news in the first few days of the talks.

“We are not in a position today that this is enough common ground that we could agree upon.”

He added later that there was some misunderstanding and that the text “wasn’t really a proposal” but instead a gathering together of everything that had been requested.

Timmermans added that they were still waiting for the “real first proposal”.

If you searched ‘climate’ on Twitter this week, the top results were #climatescam - just ahead of #climatecrisis and #climateaction.

There has been no explicit change in the social media company’s approach to tackling climate denialism on the platform. But the Climate Action Against Disinformation (CAAD) coalition is still concerned about what has been spreading online during the conference.

There was a special climate topic introduced around COP26, helping users to find reliable content, she says. An official @TwitterEarth handle had launched just before this year’s UN climate conference in Egypt.

A trend quickly picked up by CAAD was the idea of censorship tests. After Elon Musk promised free speech on Twitter, users were testing if false and incendiary statements would be taken down.

One of these statements was ‘climate change is a hoax’. It was not removed.

Harassment has also increased, they say, as well as actively misleading takes on the climate crisis.

3. Climate vulnerable nations say no loss and damage fund is a ‘betrayal’

For many countries vulnerable to climate change, the creation of a loss and damage fund is the measure of the success of COP27.

And the lack of details in the draft text on how a fund would work has led to renewed demands from developing nations.

Environment Minister for Antigua and Barbuda Molwyn Joseph said that “anything less than establishing a loss and damage fund at this COP is a betrayal of the people who are working so hard to clean up this environment, and the people fighting for humanity.”

Sherry Rehman, Pakistan’s climate change minister said that negotiations were at a “pivotal point” and a decision must be made this week.

Referring to the devastating flooding that affected 33 million people in the country this year, she said that the “dystopia which came to our doorstep will come to everyone.”

“We are very clear that we see this as a climate justice issue and if it continues to be kicked down the road we will see it as a justice denied issue.”

4. Around 150 countries sign up for the Global Methane Pledge

Some 150 countries have signed up to the Global Methane Pledge - an initiative supported by the US and EU to cut emissions of this planet warming gas.

Launched at COP26 last year, it targets leaks, venting and flares from natural gas industries. Today US climate envoy John Kerry gave an update on the pledge, saying it will also target methane emitted by agriculture and the waste industry.

Alongside EU climate chief Frans Timmermans, Kerry outlined how the US will aim for simple fixes to cut in methane emissions. Methane is four times more potent than carbon dioxide.

“If we do these simple things, the baseline assessment indicates we can avoid 0.2 Celsius in global warming in the atmosphere between 2040 and 2070,” Timmermans said.

5. It looks like we’re heading into overtime in Egypt

The Friday deadline for a final agreement is fast approaching and with disagreements over what aplenty, it looks like negotiations are heading into overtime.

Diplomats say they are far from having something that everyone will agree on - particularly in the confrontation between the Global North and South over climate compensation.

UN Secretary-General Antonio Guterres warned of a “breakdown in trust between the North and South”.

“COP27 is scheduled to close in 24 hours - and the parties remain divided on a number of significant issues.”

Guterres said it was “no time for finger pointing” and the “blame game is a recipe for mutually assured destruction.”

“I am here to appeal to all parties to rise to this moment and to the greatest challenge that humanity is facing.”