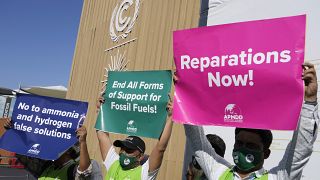 As the second week of COP27 gets underway in Sharm El Sheikh, we’re here to bring you a quick rundown of the most important things that happened last week.

Week one saw world leaders arrive in Egypt, the release of various climate research and secretary-general of the United Nations António Guterres making the wrong speech.

So what were the five key things we learnt last week at COP27?

One of the big topics during the first week of COP27 was the need for large polluting countries and businesses to financially support the nations who are already suffering the effects of climate change.

Prime Minister of Antigua and Barbuda Gaston Browne called for fossil fuel companies to be taxed more heavily to cover the cost of the environmental damage they cause.

A handful of countries including Austria, Belgium, Denmark, Germany and Scotland also pledged funds to help support vulnerable nations with loss and damage.

2. The UN cracks down on greenwashing of net zero pledges.

New guidelines were released by the UN to help reduce greenwashing in the net zero pledges of nations and businesses.

Whilst UN Secretary-General António Guterres said that the growing number of pledges was a good thing, he shared his doubts about their effectiveness explaining that there were “loopholes wide enough to drive a diesel truck through.”

He called for net zero promises to become credible and for polluting activities to no longer be outsourced as a means to lower a country or business’s emissions declarations.

On day four of COP27 Climate TRACE - an independent emissions tracking NGO - released a report analysing the emissions of 72,612 individual sources of CO2.

It revealed that half of the top 50 biggest polluters were oil and gas fields. The report also suggested that many organisations are underreporting their emissions to the UN.

“Among the top countries that report their oil and gas production emissions to the UN, Climate TRACE finds emissions are as much as three times higher than self-reported data,” their research revealed.

At this year’s COP, protestors have been officially confined to a designated area away from the main Blue Zone where negotiations are taking place.

But, on the fourth day of COP27, climate activists finally rebelled against these rules and began demonstrations. The biggest action took place on Saturday when hundreds of people joined a march calling for climate justice at the conference centre.

Unlike previous COPs, protests have been severely limited in Sharm El Sheikh as demonstrations are banned in Egypt.

On day six of COP27, President of the United State, Joe Biden arrived in Sharm El Sheikh, having been delayed due to US midterm elections.

In his speech covered many topics including Ukraine, the US’s withdrawal from the Paris Climate Agreement - and how they rejoined - as well as pledges to reduce methane.

He urged the world to look at cutting their methane emissions, which have 30 times the global warming effect of carbon emissions.

“Today I can stand as President of the US and can say with confidence we will meet our emission reduction targets by 2030,” he said.

Watch the video above to see more from week one of COP27.