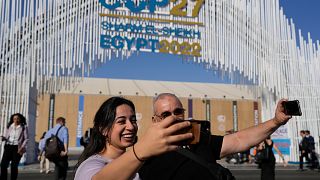 Just over a week ago, world leaders arrived in Sharm El Sheikh, Egypt for COP27.

Things got off to a good start with loss and damage on the agenda for the first time. But progress quickly slowed as countries argued over how this funding should be paid for.

As the week continued, talks all around continued to move at a glacial pace.

But now the big names have left the UN climate conference, negotiators and officials are getting down to deals and details. And it isn’t all bad news.

Looking ahead to the second week, here are some of the more positive notes to watch for as we approach a final agreement at COP27.

Young people finally get a seat at the table

This year sees the first official space for young people at COP27 - the Children and Youth Pavilion. And so far, it has been buzzing with activity throughout the event.

They’ve had visits from COP26 President Alok Sharma and Sameh Shoukry, COP27 President. A giant mural has been painted and many young attendees have relished the opportunity to have a designated space for meetings.

But it isn’t just a seat on the floor of the conference that has brought hope - they’ve also got a seat at the negotiating table.

On Friday, YOUNGO - the official youth constituency of the UNFCCC - celebrated securing official recognition as stakeholders in designing and implementing climate policies.

This recognition means that they can go to governments and ask to be included in national delegations.

Now, these youth campaigners are hoping that their presence can be solidified as a cornerstone of all future UN climate conferences.

Last year, countries pledged to ‘phase down’ coal power. India is hoping to expand this pledge to include all fossil fuels.

At COP26 in Glasgow, the final statement included a commitment to a “phasedown of unabated coal power.” It started as a call to phase out the polluting fuel but ended with more vague phase-down phrasing. It was still significant, however, as it was the first time the fossil fuel industry had been put on notice.

Now, sources have told Reuters that India is hoping to push countries at the UN climate conference in Egypt to agree on phasing down all fossil fuels.

A spokesperson who spoke on condition of anonymity said that country has referred to a report from the UN’s climate science panel which says emissions must be halved by 2030 to meet climate goals.

The proposal will have to be agreed upon by consensus this week if it is to be included in the final COP27 deal.

The UN has put a red line around the greenwashing of net zero pledges from companies and institutions. It sets out a ‘how to guide’ on what they must do for these goals to actually be credible.

UN Secretary-General António Guterres said that the growing number of net zero pledges was “good news”. Currently, more than 80 per cent of the global economy is covered by promises like this.

But the current system amounts to little more than “rank deception” with “loopholes wide enough to drive a diesel truck through” in terms of their effectiveness, Guterres added.

The new report from the UN lays out concrete standards for carbon-cutting initiatives. It calls for businesses, financial institutes, cities and regions that want to use the label ‘net zero’ to be aligned with scientific evidence.

As the report states, “voluntary commitments can only take us so far”.

Barbados pushes for an overhaul of climate finance

Known as the Bridgetown Initiative, it was devised by Prime Minister Mia Mottley and climate finance envoy Avinash Persaud. The goal is to restructure international financial institutions and hold them accountable, making sure the money goes to countries struggling with debt made worse by the climate crisis.

The initiative would help create new avenues to fill the gap in finance for climate action.

French President Emmanuel Macron backed Mottley, calling for the IMF, the World Bank and other major lenders' rules to be changed so that debt repayments are halted in the event of a disaster.

“What you're asking of us in terms of debt reimbursement and guarantees, when we are affected by a climate shock, when we are a victim of a climate accident, to some degree, there must be a suspension of those conditions,” he said.

Macron added that by next spring, international financial institutions will need to “come up with concrete solutions to activate these innovative financing solutions.”

The Group of Seven leading economies has launched a new insurance system to provide swift financial aid for nations hit by the devastating effects of climate change.

Called the ‘Global Shield’, it is backed by V20 - a group of 58 climate-vulnerable nations. The first contribution will be more than €200 million, mostly from Germany.

The insurance initiative launched on Monday “kicks in automatically” and is intended to help vulnerable countries recover from climate disasters. Pakistan, Ghana and Bangladesh will be among the first countries to receive funding.

“If there is no protection scheme in place, a drought can mean that a smallholder farmer loses not only her harvest but also her entire livelihood because she cannot afford to buy new seeds,” Germany's ministry for economic development and cooperation said in a statement.

Other countries including Ireland and Denmark have also pledged around €40 million toward the initiative.