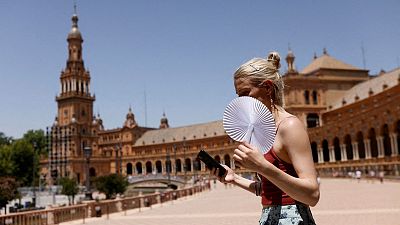 Seville has become the first city in the world to start naming and classifying heatwaves, which are becoming increasingly frequent and severe as a result of climate change.

After Spain endured its earliest heatwave in 40 years last month, the Mayor of Seville unveiled the pioneering new system on 21 June, the first day of summer.

Located in the Guadalquivir river valley in Andalusia, the southern city is one of Spain’s hottest places, and a hugely popular tourist destination.

"We are the first city in the world to take a step that will help us plan and take measures when this type of weather event happens," mayor Juan Espadas says.

The pilot project comprises three categories and will alert the population up to five days in advance of a heat event.

Heatwaves will be named in reverse alphabetical order. The first five will be called Zoe, Yago, Xenia, Wenceslao and Vega; names sure to be familiar to Sevillians before long, as temperatures soar to 42C this weekend.

What is the benefit of naming heatwaves and storms?

A key rationale behind proMETEO Sevilla - the collaboration between the city and Adrienne Arsht-Rockefeller Foundation Resilience Center (Arsht-Rock) - is that it will link weather forecasts to health warnings.

"This new method is intended to build awareness of this deadly impact of climate change and ultimately save lives," says Kathy Baughman McLeod, director of Arsht-Rock, a think tank which develops solutions for climate risks.

Each of the three categories (one being the least severe) will trigger a distinct set of safety measures and policies, such as the opening of city pools and water parks, or the activation of community health workers who will check on elderly and other at-risk individuals.

Naming heatwaves also spells out an important reality: these are no longer “freak” weather events.

While people have been naming storms, tornadoes and hurricanes for centuries, the US National Hurricane Center only began officially naming tropical cyclones back in the 1950s.

The practice is particularly useful when two storms are taking place at the same time, and is thought to raise awareness and help prepare for incoming weather systems.

However, scientific data is lacking on whether naming storms helps save lives. “The National Weather Service is not aware of any research or evidence that suggests naming heatwaves would raise awareness about heat-related risks,” Kimberley McMahon, a NWS Public Weather Services programme manager told The Guardian in a recent interview.

But she concedes that early warnings can help people to prepare for extreme weather, “Even knowing the potential for a heat event or abnormally hot summer can allow preparations to occur further in advance.”

Where else is considering naming heatwaves?

The US state of California is considering naming heatwaves after its record-breaking drought entered a third year.

The western state experienced its hottest summer on record in 2021, followed by the driest start to a year in recorded history.

According to the National Weather Service, heat-related deaths are now the biggest weather killer in the US. They are responsible for more deaths every year than any other extreme weather pattern - including flooding, hurricanes and tornadoes.

An average of 138 American citizens die as a result of extreme heat every year. And researchers hope that naming heatwaves will raise public consciousness of their dangers and environmental root causes.

Alongside naming, the US state is considering ranking its heatwaves, so that people are aware of the severity of incoming weather systems. This would make it the first state in the country to implement such a system.

Greece is also reported to be planning a heatwave system, after the worst heatwave in decades last year sparked wildfires in all corners of the country.