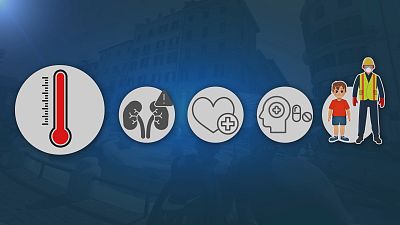 Global warming means Europe is facing more frequent and more intense heat waves - so what does it mean for your health? How hot is too hot? It's a complex issue.

Anyone can get too hot and dehydrated, but the health risks depend on who you are, where you live, and the time of year.

Another factor is that our body actually acclimatizes to the heat over the summer, so a heatwave in late spring is harder to manage than a heatwave in mid-August.

Finally, there's where you're from. Someone who grew up in Rome or Athens is better adapted to deal with temperatures in the mid-30s than someone from Dublin or Helsinki.

It's hard to identify a temperature by which we would say it's too hot or we should issue a warning. It's not universal.

So it's all relative.

“It's hard to identify a temperature by which we would say it's too hot or we should issue a warning,” says heat and health specialist Francesca de'Donato from Lazio Regional Health Service.

Where there is universal agreement is that humidity is a growing problem.

As the atmosphere gets warmer it can hold more water vapour, and when humidity and temperatures rise to a certain level the body's ability to cool down by sweating just doesn't work anymore.

Some places in the Persian Gulf, Pakistan, Mexico, and south-east Asia now pass this threshold sometimes.

For example, if it's 38 degrees Celsius with 75 per cent relative humidity then it's hot enough to be potentially fatal for some people.

According to scientists, as many as 3 billion people could be living in these kinds of conditions within 50 years.