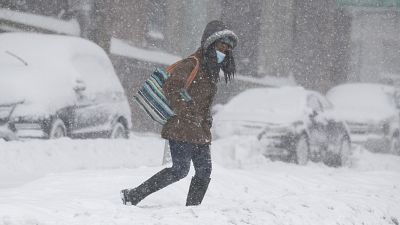 An Italian research centre is testing how organisms and objects react in extreme climate conditions.

The centre is able to generate extreme weathers and temperatures from -40 degrees Celsius up to +60 which could be used to predict how climate change is affecting the natural world.

Once upon a time, mountain rescuers had to climb for hours or even days to practise emergency procedures. But now they can do it from the comfort of the terraXcube climactic chambers.

These are part of the Eurac Research centre in the NOI tech park in Bolzano.

Here climate conditions are technology controlled, from blizzards to dry heat waves, everything can be reproduced artificially.

"In these rooms we can reproduce in a systemic and replicatable way environments that have extremely low temperatures [...]. And in terms of altitude we can go up to 9,000 meters," explains Christian Steurer who heads the Centre.

"We can combine the wind, the snow, the rain, and all these conditions to create an extreme environment where we can put subjects that need to be analysed."

Experiments of all kinds have been ongoing since terraXcube opened in April 2019.

What are scientists testing?

In this project, researchers are studying how changes in blood thickness increase its capacity to carry oxygen when humans ascend to high altitudes.

But the highly controlled environment can study high altitude acclimatisation on women's blood as well.

Private companies have also been taking advantage of the technology.

"We did some defrosting tests on big machines. These are cabins where people have to be inside, we defrosted them in a cold environment and the test was to understand how fast the glass of this cabin can be defrosted, the results were excellent for the client as well and we were able to demonstrate that this glass has a great performance," says Steurer.

Machinery made by the tractor cab makers Lochmann Cabine Srl is covered in frost.

The room temperature is dropped to -20 degrees Celsius and its heating systems are tested for defrosting. Several sensors also monitor how long it takes for the ambient temperature in the cabin to reach 16 degrees.

All of this is recorded by the chamber's video camera systems, providing clear data to the company.

How could the experiment help us tackle climate change?

After doing studies on human behaviours and technology, terraXcube has now received national accreditation to carry out climate tests, not only on technology but also on biological organisms.

"In these rooms we can accelerate time, or expose biological organisms, which can be plants, or even other small organisms, to extreme climate conditions," says Steurer.

He hopes the data they gather here will help humans learn how to care for the natural world a little better.

Researchers can carry out these tests and see the effects without having to go out, without putting themselves in danger.

"One example is that currently plants grow at certain altitudes. With climate changes these parameters change, and we can reproduce that artificially here in an accelerated way. So researchers can carry out these tests here and see the effects without having to go out, without putting themselves in danger and within in the amount of time they need."

"I trust nature, sooner or later nature has always won. Man is finally understanding that extreme changes must be made to help nature be what we need it to be," says Steurer.

Understanding the impacts of climate change is probably the most important issue of all.

"We can at least contribute to saving the planet. It's true that we are late but I don't think it's too late so I think it's better that we now accelerate altogether," says Vincent Mauroit, Director of Innovation and Tech Transfer, NOI Techpark Alto Adige.