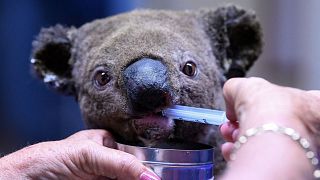 A dehydrated and injured koala receiving treatment at the Port Macquarie Koala Hospital in Australia.   -   Copyright  AFP
By Maeve Campbell  with Reuters  •  Updated: 21/11/2022

Australia has lost more mammal species than any other continent, according to a landmark report released on Tuesday.

The five-yearly environmental study also revealed that the country has one of the worst rates of species decline among the world's richest countries.

Some animals such as the blue-tailed skink are now only known to exist in captivity, while the central rock-rat and Christmas Island flying fox are among mammals considered most at risk of extinction in the next 20 years. This is largely due to introduced predator species.

Trees are also threatened with extinction - the sandalwood species is currently in decline.

The report, which follows a period of drought, bushfires and floods ravaging Australia, says that the last five years have caused havoc in the natural environment.

"The State of the Environment Report is a shocking document - it tells a story of crisis and decline in Australia's environment," Environment Minister Tanya Plibersek said in a statement, adding that the new Labor government would make the environment a priority.

New national parks and protected marine areas will be created, she said, to meet a target to protect 30 per cent of Australia's land and ocean waters by 2030.

The number of species added to the list of threatened species, or in a higher category of risk, grew on average by 8 per cent from the previous report in 2016. 533 animals and 1,385 plant species are now listed.

More than half of those are assessed as endangered or critically endangered on the IUCN red list.

When was the ‘Black Summer’?

The ‘Black Summer’ bushfires killed or displaced an estimated 1 billion to 3 billion animals and razed 9 per cent of koala habitat.

"Those bushfires were an ecological bomb ripping through southeastern Australia," Plibersek said in a speech at the National Press Club in Canberra.

Spending of around A$1.7 billion (€1.1 billion) a year is required to revive the threatened species, the report said. The new government has committed to spend A$250 million (€168 million) overall.

The environmental report card paints a dire picture of "poor" and "deteriorating" conditions.

The environmental report card paints a dire picture of "poor" and "deteriorating" conditions.

Many of the country's most prized ecosystems, such as the Great Barrier Reef which has been hit by mass coral bleaching, are threatened by climate change and environmental extremes, it said.

What are marine heatwaves?

While coral reef health is declining due to marine heatwaves, the report also highlighted the threat of ocean acidification, caused by absorption of carbon dioxide from the air.

This is nearing a tipping point, say the experts. The decline of young coral, which are key to reef recovery, is a growing concern.

This should be a wake-up call for the government

Scientists and environmental groups said the report was a wake-up call for the government to step up carbon emissions reductions to curb climate change, overhaul laws to protect habitats and invest more money to protect species.

"There is no more time to waste," said Jim Radford, a research fellow at La Trobe University, Melbourne.

Plibersek promised that the government would develop new environmental legislation for 2023 after studying recommendations made by an independent review.

There is no more time to waste.

There have been calls by Australia’s Green politicians to include a climate trigger in the legislation, which could apply when new coal mines or gas projects come up for approval. However, Plibersek said there were other laws to deal with climate change.

Keen to protect votes in coal mining regions, the Labor party has said every new project would be evaluated on its merits.

But Plibersek said "no" when asked whether the fastest way to cut carbon emissions was to block new coal mines.