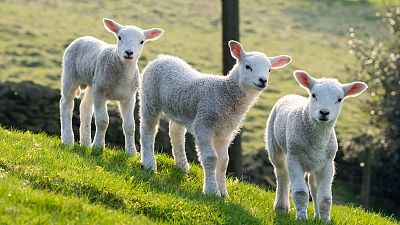 In the hilly countryside outside the small Italian town of Nerola, Massimo Manni has set up a paradise for animals. He has sheep, cows, horses, pigs, chickens, even a parrot. Now, just before the Easter weekend, he's added two lambs to the family.

One was saved from a slaughterhouse near Rome, during a peaceful protest when Massimo and other activists asked for one creature to be released as a goodwill gesture. The other new arrival was brought to the shelter after Manni persuaded a farmer to give her up and save her from the butcher's knife.

From farmer to animal rights activist

Massimo has always had a passion for animals, working in a pet shop when he was young. As an adult, he built up a small farm in the countryside. He bred lambs but shortly after he sold his first lot, something happened that made him rethink his career choice.

Since becoming an animal rights activist, he regularly takes part in protests outside slaughterhouses. He says he often sees, "three-storey lorries full of newborns crying for their mothers. You can hear the lambs' cries a few kilometres before they even arrive. It's heartbreaking."

The tradition of eating lamb in Italy, especially at Easter, dates back centuries. Over two million lambs are slaughtered every year for food, according to the Italian national statistics agency ISTAT.

But the tradition might be on its way out. Butchers in Rome say that with fewer shepherds there is less meat available and it is more expensive.