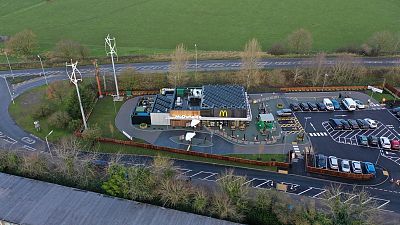 McDonald’s has opened its first net-zero restaurant. But is it a blueprint for the future or just more greenwashing?

The new branch, located in the UK town of Shropshire, is powered by on-site solar panels and wind turbines. The building is also insulated with British sheep’s wool and clad in recycled IT equipment.

McDonald's spokeswoman Beth Hart says the Market Drayton eatery, which opened today (10 December) “will act as a blueprint for our future new builds.” The chain aims to make all new builds net-zero by 2030 while improving its existing 1,400 branches in the UK and Ireland.

What actually goes on inside the kitchen is another issue, however, as campaigners have pointed out.

Why has McDonald’s been accused of greenwashing over its new build?

The attention to detail - signs made out of used coffee beans, a drive-thru lane of recycled tyres - sits in stark contrast to the scale of McDonald’s meat and dairy operations.

“If meat and dairy are still the main course on McDonald’s menu, then this new restaurant initiative can only be labelled as it is: McGreenwash,” says Greenpeace UK campaigner Anna Jones.

Greenwashing was first coined to describe a similar disparity between a company’s consumer-facing actions and its wider environmental policies. In the 1980s, American environmentalist Jay Westervelt noted how at a hotel he visited, there were signs asking guests to reuse their towels in order to “save the environment.”

He contrasted this with the vast amount of wastage he had encountered throughout the rest of the hotel, where there were no obvious efforts being made towards sustainability, and concluded the towel-washing was more about the business’s own image.

Simply put, the bulk of McDonald’s carbon emissions come not from its buildings but from its role as one of the world’s biggest buyers of beef.

It has been reported by The Counter that around 726 million kilograms of beef it purchases every year contribute 29 per cent of the company’s carbon footprint.

Jones explains that climate-critical forests in South America are being "decimated" by production linked with meat and dairy. McDonald's ought to "think beyond emissions from specific UK sites and start to urgently shift its entire business model to meat-free alternatives," she adds.

McDonald's has not pledged to reach net-zero in its supply chain until 2050 - which others have commented will be too McLate.

What about McDonald's McPlant burger?

The launch of McDonald's plant-based McPlant burger in October was also met with mixed reviews.

Vegans had been pressuring the fast-food chain to join the meat-free movement for years, as the brand has historically been lacking in vegan options.

“When will McDonald’s take climate change seriously and launch some vegan burgers?” a Twitter user asked.

The certified vegan burger features a Beyond Meat patty and contains its own special vegan sauce and cheese.

The global chain spent three years developing the McPlant and it has even been accredited as vegan by the Vegetarian Society.

The burger costs the same as the famous Big Mac at £3.49 (€4.09) and is cooked separately from other meat and dairy products, ensuring no cross-contamination. Something which can’t be said of all its competitors.