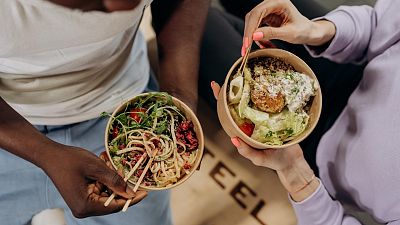 Most food that was recommended for boosting your immune system was found to be plant based.   -   Copyright  Pexels
By Rosie Frost  •  Updated: 08/09/2022

Searches for ‘immunity boosting foods’ rose by 350 per cent at the start of the pandemic as people sought out ways to stay healthy. And it turns out some of the most frequently recommended health foods may also be good for the planet.

Analysing search results for ‘immunity boosting’ foods, researchers in Australia looked at 150 pages from six different parts of the world. They found that 83 per cent of the 2,556 recommendations were plant-based.

“We found a variation - from a high of Australia’s 82.5 per cent plant-based food recommendations to a low of 77.7 per cent in the UK,” says dietician Professor Danielle Gallegos, one of the co-authors of the study from Queensland University of Technology (QUT).

“While there is no evidence that any one food provides immunity from infectious diseases, a person’s overall diet can affect their health and disease susceptibility.”

She adds that the only evidence-based approach to immunity is vaccination, but clinical studies have shown that a poor diet increases the risk of infection. Nutrients found in plant-based foods, like vitamin D, zinc and phytonutrients, can protect against disease and increase resistance to infection.

The six most frequently recommended food groups were all plant-based, including leafy green vegetables, nuts, and lycopene-rich fruits and vegetables such as tomatoes.

Are immunity-boosting foods good for the environment?

Dr Ayesha Tulloch, another of the study’s authors, says that the average environmental impact of commonly recommended ‘immunity boosting’ foods is generally lower than those that were rarely recommended.

“For each of [the recommended] foods, we determined how the agricultural production of a serving impacted five types of environmental degradation: greenhouse gas emissions, land use, scarcity-weighted freshwater use, and acidification of soil and eutrophication (two forms of nutrient pollution) using data from two global studies,” Dr Tullock explains.

They found that eating a serving of the most commonly recommended ‘immunity boosting’ foods would result in lower impacts for greenhouse gas emissions and land use, and pose lower health risks compared with less recommended foods.

The same wasn’t true for the impact on aquatic environments, however, because of the chemicals and freshwater used in the foods’ production. Water impacts were higher for more recommended foods than those less commonly seen on online lists due to fertiliser runoff, pollution and overuse of supplies.

Not all of the most recommended foods follow this pattern either. Eggs, yoghurt and poultry all came in the top 20 despite researchers finding they have some of the worst health impacts for disease risk. These foods also score badly in terms of environmental impact.

The researchers say that moments like this, when the public is interested in food health and environmental impacts, are the perfect time to educate people.

In times of crisis when people are more likely to seek information, there is an opportunity to engage with the public online and build awareness of beneficial behaviour change.

“Empowering the public to change eating habits and food consumption to more sustainable practices is complex and requires a combination of approaches, and online information should not be disregarded in this mix,” says Professor Gallegos.

“In times of crisis when people are more likely to seek information, there is an opportunity to engage with the public online and build awareness of beneficial behaviour change.”