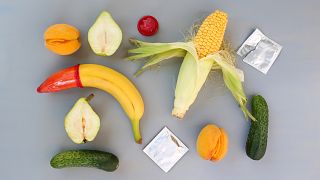 We all know eating more plants is good for us and the planet, but some say the benefits of a vegan diet extend to our love lives too. Who doesn’t want better circulation and stamina, for a more enjoyable evening for all involved?

A survey in 2020 discovered that 84 per cent of vegetarians reported satisfaction with their sex lives, compared to only 59 per cent of meat eaters. But crucially - 95 per cent of vegan participants said they were satisfied.

So why do vegans purport to have better sex?

Red meat can make for a heavy meal, often leaving you feeling lethargic and sleepy afterwards - which is not the sexiest mood to be in. Whereas vegetables don’t leave you bloated or tired in the same way. In fact, research suggests there is a link between B vitamins, found in spinach, brussels sprouts and oranges, and serotonin production. This is one of the chemicals in your brain that makes you happy.

But, hang on, we all know the saying about beans, and it’s true, beans can cause flatulence. Not ideal for a romantic evening. What’s the best dish to eat before you jump into bed?

“The Mediterranean diet has long been known to support a healthy heart, but research has also shown these benefits may extend to sexual health – reducing the risk of erectile dysfunction and preserving sexual function,” explains London-based nutritionist Lily Soutter who works with Future Farm.

“So, by eating less meat, moderate fish and dairy, small amounts of red wine and having an emphasis on plant-based foods, things could certainly be looking up in the bedroom.”

She adds that if you’re worried about baked beans on toast, go for green beans, rice or quinoa instead, which are less likely to make you gassy during those intimate moments.

“What’s more, red and processed meat appear to have the greatest effect on the environment out of any type of food. Shifting our diets to encompass more plant-based protein, may even help to cultivate a more environmentally sustainable diet,” says Soutter.

Do vegans agree with this assessment?

We spoke to three people anonymously who identify as vegan, to get the lowdown on whether their love lives have improved since going plant-based.

One started off by saying, “plant based food is generally easier to process, which makes vigorous sex after a dinner date more pleasant.” He added that there haven’t been too many changes to his sex life, but that “the only noticeable difference is probably right after a meal”.

Another vegan living in the North of England went into some more detail for us.

“I’ve been a vegan on and off for about 10 years - and its quite obvious how much having a vegan diet has improved my sexual performance. I have stronger erections, more stamina, quicker refractory periods, and could perform three to four times within a night/session,” he tells us.

I have stronger erections, more stamina, quicker refractory periods, and could perform three to four times within a night.

For anyone that is unsure - a refractory period is the time between an orgasm and when you feel ready to be sexually aroused again.

“When I had a meat-based diet,” he continues, “I would feel sluggish and eventually put on extra unnecessary weight. With regards to sex, it felt satisfactory, but my refractory period was longer, my erections weren’t as strong as they are now and after having sex twice in a night, I would feel my mind would want more - but my body would say that’s enough.”

But what about when it comes to athletic ability and how you feel about your body, is that a factor too?

One east Londoner enlightens us.

“On a personal level I've felt leaner, fitter and more energetic since going vegan, which definitely helps when it comes to love,” they say.

I've felt leaner, fitter and more energetic since going vegan, which definitely helps when it comes to love.

“I do think vegans are more active and consequently more passionate when it comes to sex. I've noticed that vegans often have a greater sex drive and are more likely to try new things - I wonder if this is because they're often made to try new things as vegans too?”

A recent study by health food chain Holland & Barrett shows that 35 per cent of Londoners on a vegan diet have seen an increased libido.

People who avoid animal products smell ‘significantly’ better than those that don’t.

Sex and relationship expert Annabelle Knight agrees - adding that going vegan can even affect how we taste and smell.

“Switching to a plant-based diet can make you smell and taste better. A study from 2006 on body odour and diet found that people who avoid animal products smell ‘significantly’ better than those that don’t, and – as a sexy side note for anyone with a penis – your semen will taste a whole lot better too!” she says.

“There is evidence to suggest that men with diets rich in fresh fruit and vegetables have sweeter tasting sperm. The chlorophyll in foods like celery and parsley, for example, makes them a great choice. By contrast, red meat is known to make semen taste salty.”

So not only is going vegan the “single biggest way” to reduce your environmental impact on earth, according to the University of Oxford, it could also be the key to a better relationship. Sign me up?