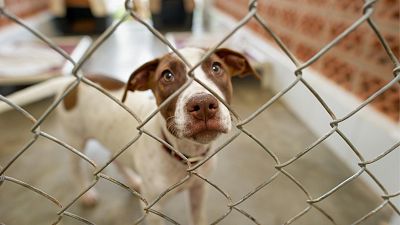 For many of us, our furry friends are just another member of the family. They make us laugh, show us love and give us purpose and structure.

Between March 2020 and March 2021 it’s estimated around 3.2 million pets joined families during lockdown in Britain. It’s a similar story across Europe and US.

According to data published by the European Pet Food Federation in 2021, 38 per cent of households in Europe now own a pet. That’s 88 million homes.

But with the cost of living crisis and prices only set to get worse this winter, will having an extra mouth to feed be the straw that breaks the camel’s back?

How much does it cost to own a pet?

There’s lots of hidden costs to owning a pet - it’s a lot more than just buying a few cans of dog food a week. You’ll need to make sure you keep them healthy, safe and entertained.

Moneyhelper.org.uk estimated in 2021 that depending on the size of your dog or cat, you could be looking at €230 to €460 per year just on food.

Plus when you add in things like poo bags, flea treatment, insurance, toys and healthcare, according to the PDSA (The People's Dispensary for Sick Animals), you could be spending between €58 and €93 per month on your dog.

“A lot of owners aren't actually aware of the cost of veterinary fees,” says Merryn Walker, head of kennels, dog adoptions and fostering at Mayhew, an animal welfare charity in London.

It’s not uncommon for dogs to arrive at Mayhew with lumps that need removing or other expensive veterinary needs.

Though pet insurance may seem costly, it’ll save you a lot of money if your pet does get ill.

It’s also worth investing in lifetime pet insurance. Though during the early years, it’s more expensive than one year policies, the cost won’t shoot up exponentially as they get older.

Plus with annual policies, you might find it difficult to find an insurer once your pet reaches its senior years.

How will the energy crisis affect pets?

UK residents will see an 80 per cent increase in their annual household energy bills in October, the country's energy regulator announced on August 26. This follows a record 54 per cent spike in April.

The latest energy price cap — the maximum amount that gas suppliers can charge customers per unit of energy — will take effect on 1 October, just as the cold months set in.

And bills are expected to rise again in January to €4,630.

In the aftermath of April’s price rise, animal shelters like Mayhew saw an increase in the number of people giving up their pets.

"A lot of people are too embarrassed to tell us the real reasons,” explains Georgina Costi, cat welfare coordinator for Mayhew.

“But of those people that have actually told us - they quite simply can't afford to care for their pet anymore.

“I can't even actually recollect anybody saying that during COVID. And we've definitely had a significant number of them telling us that this year."

What worries both Georgina and Merryn is as they’ve seen the number of people giving up their pets rise, they’re also seeing a severe drop in new owners looking to adopt.

"And if that continues to rise, then unfortunately, we are at capacity and there's just more and more dogs that we can't help," warns Merryn.