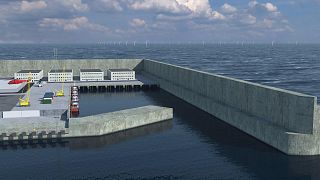 A concept image for what the energy island could look like.   -   Copyright  Danish Energy Agency/Cover Image via Reuters Connect
By Rosie Frost  •  Updated: 06/05/2022

The construction of two energy islands off the coast of Denmark is being sped up to help wean the country off Russian fossil fuels.

Minister of Climate, Energy, and Utilities, Dan Jørgensen recently announced that it is pushing forward its green energy plans in response to the Ukraine war.

“Denmark and Europe must be free of Russian fossil fuels as fast as possible,” he said in a statement.

To do this, the country is massively accelerating its green transition by deploying renewable energy on land as well as at sea. The North Sea alone holds the wind energy potential to cover the energy needs of millions of European homes, Jørgensen added.

Denmark and Europe must be free of Russian fossil fuels as fast as possible.

“This great offshore wind potential must be harvested and therefore, the Danish government begins preparations for additional energy islands along with the ones already planned.”

The plans for the world’s first ‘energy island’ have been in place for a while as part of a programme to replace fossil fuels with renewable energy.

Hundreds of wind turbines will be linked up to these artificial islands allowing Denmark to generate much more energy than with other offshore wind projects.

One will be based in the North Sea, producing 3GW of energy. The other will be constructed on the island of Bornholm in the Baltic Sea, generating 2GW from offshore wind.

Operating as “green power plants at sea”, the Danish Energy Agency says they will serve as hubs to connect wind turbines to electricity grids in the region surrounding the two seas. Together they will be able to power at least 5 million European homes with the potential to expand to 10 million in the future.

Can Europe escape its reliance on Russian fossil fuels?

They were originally set to be operational by 2030 but Denmark is now looking to reduce its reliance on fossil fuels faster in the wake of the war in Ukraine. Already 48.6 per cent of the total energy the country produces comes from wind power.

According to the International Energy Agency, nearly 16 per cent of Denmark's energy generation relies on Russia. It is down from 34 per cent in 2016 but the country is now hoping to push for complete independence from this source.

Jørgensen is also hoping that discussions in Esbjerg with energy officials from Germany, Belgium, the Netherlands and the European Commission later this month can help with a swift energy transition.

They will present concrete plans on how offshore wind from the North Sea can help the EU achieve climate neutrality and energy independence.

“The EU must become independent from Russian fossil fuels as fast as possible and the best way forward is for the European countries to work together to scale up and speed up the buildout of renewable energy in the North Sea,” he says.