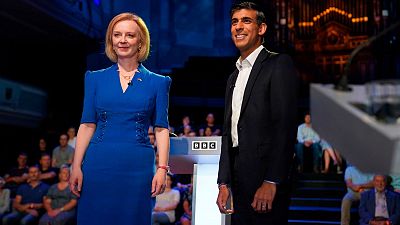 As Liz Truss and Rishi Sunak battle for the UK’s Conservative party leadership, their commitment to tackling the climate crisis remains unclear.

Brits watching the Tory hopefuls’ first head-to-head televised debate last night found little to reassure them that the next PM is prepared for the most pressing issue.

Despite last week’s record-breaking temperature of over 40C in the UK, the BBC debate posed only one direct question on climate change to the candidates. What three things should people change in their lives?

I was a teenage eco warrior campaigning against damage to the ozone layer.

Sunak touted energy efficiency, better recycling and “innovation” to solve the problem. While Truss, who says she was “an environmentalist before it was fashionable,” promoted saving resources, cutting down on food waste, and innovating with technology such as electric vehicles.

“What I don’t want to see is ordinary households penalised by our net zero targets,” she added. Though recent analysis by the Climate Change Committee, the government’s independent adviser, found reaching net zero would save the UK 0.5 per cent of GDP if current high gas levels continue.

Both candidates have a poor track record of voting for measures to prevent climate change. So far, green policy proposals have not been central to their bids to become the UK’s next prime minister.

How has Sunak voted on climate change in the past?

Sunak has consistently voted against policies to tackle climate change. In February 2020, he voted against calling for a government proposal to eliminate almost all transport emissions by 2030.

In 2016, he also voted against lowering the maximum rate of carbon dioxide emissions in new homes, and against establishing a decarbonisation target in Britain.

In his previous role as Chancellor, Sunak opposed a windfall tax on oil and gas companies tabled by the Labour party to tackle the energy crisis.

He also offered a tax deduction of 91 per cent for these companies’ investments in further oil and gas extraction.

He did, however, introduce a VAT reduction for people who install insulation and eco-friendly technology like solar panels in their homes.

How has Truss voted on climate change in the past?

Truss has primarily voted against measures to prevent climate change. She opposed the requirement for ministers to have “due regard” of the net zero 2050 target when making policies.

As Foreign Secretary, she announced in March that aid spending would be prioritised for women and girls rather than global health and climate change.

During her time as Environment Secretary, Truss was criticised for cutting subsidies to solar farms, which she described as a “blight” on Britain’s landscape.

What have Truss and Sunak said about future green policies?

The two Tory candidates have said little about how they will deal with green issues.

During an hour’s interview with the BBC, GB News and LBC last week, the candidates only spoke for a couple of minutes about environmental policies.

It is truly damning that, in a week when the climate emergency has never felt closer to home, its discussion in the Tory leadership race has been conspicuous by its absence.

“It is truly damning that, in a week when the climate emergency has never felt closer to home, its discussion in the Tory leadership race has been conspicuous by its absence,” Green MP Caroline Lucas said in response to the interview.

So what do we know about the two candidates' green policies?

Truss has confirmed she will maintain the UK’s 2050 net zero target but also said she wants to rethink some net zero policies.

She said she may introduce a “temporary moratorium on the green energy levy to enable businesses and industry to thrive while looking at the best way of delivering net zero,” during an interview with The Spectator.

The foreign secretary has also stated she would temporarily halt the “green levy” to fund initiatives that decarbonise the energy supply, and will instead increase gas extraction in the North Sea.

She has, however, stated that she will attend COP27 and the 15th biodiversity COP.

Sunak has been slightly more vocal about his green policies. Like Truss, he is committed to the net zero 2050 target.

He said he would consider introducing new energy efficiency schemes for housing with initiatives like low-carbon heating and insulation.

He has also said he will introduce policies to move towards a “self-sufficient” energy network in Britain by 2045. This would likely focus on harnessing offshore wind.

Sunak has suggested, however, that he would go ahead with a ban on onshore wind farms.

Economy eclipses other issues in race to be UK PM