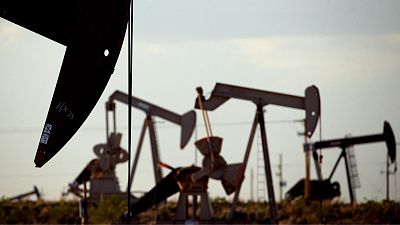 The world’s biggest oil and gas companies, including Shell, Exxon and Gazprom, are projected to spend €857 billion on new oil and gas fields by 2030.

This could grow to a staggering €1.4 trillion by 2040, says new research from Global Witness and Oil Change International. All 20 of the companies investigated by two NGOs claim to support the Paris Agreement goal of keeping global warming below the critical 1.5C threshold.

The new analysis comes just a week after UN Secretary-General, Antonio Guterres called it “moral and economic madness” to invest in new oil and gas.

According to the most recent IPCC report, new oil and gas projects would push the world well over safe limits for global warming. World-leading climate scientists warned that we need to reduce fossil fuel use to keep emissions targets in sight.

Since the UN report was released on 4 April, seven new oil and gas projects have already been approved. And this new research from Global Witness shows that the biggest fossil fuel companies in the world are still set to spend billions on new projects in the next decade.

What are fossil fuel firms spending on oil and gas?

Russian state company Gazprom topped the list for gas with a predicted spend of €373 billion according to the data from independent energy research firm, Rystad Energy. Qatar Energy came in second with €52 billion followed by Total Energies at €29 billion. Shell placed fourth with a projected spend of €26 billion.

For oil extraction, American firms topped the list with Exxon the highest (€54 billion). Chevron (€52 billion) and Conoco Phillips (€51 billion) made up the rest of the top three.

“From the day the Paris Agreement was signed these companies have been out of compliance,” says Lorne Stockman, research director at Oil Change International.

It is past time governments cut them off. No more tax breaks or public finance for oil and gas. We’re beyond second chances.

“In the subsequent six years, they have published their statements and honed their PR and lobbying while recklessly pursuing oil and gas production growth.”

He adds that as the window of opportunity for avoiding disaster begins to close, these companies are still looking for ways to grow.

“It is past time governments cut them off. No more tax breaks or public finance for oil and gas. We’re beyond second chances.”

What do fossil fuel companies have to say about the results of the report?

When asked to comment on the findings of the report, ExxonMobil highlighted its “$15 billion (€13.8bn) investments in lower-emissions technologies.”

Chevron highlighted plans to reduce the “carbon intensity” of the oil and gas it produces and develop “profitable, lower carbon new energy businesses that leverage our strengths.”

Conoco Phillips said its plan for a “net-zero energy transition” addresses the carbon intensity of its products and features opportunities for the company to invest in carbon capture, hydrogen and offsets. The firm, however, rejects any targets that would reduce its production.

And TotalEnergies says it believes the data from Rystad Energies used for the report overestimates its future investments. The company expects to spend around €11.8 bn on “greenfield and exploration” between 2022 and 2026.

The oil and gas giant adds that it has targets for developing renewables and electricity production.

It’s time to ‘tear away the greenwash’

In the wake of the report, Global Witness and Oil Change International are calling on governments and investors across the world to stop funding new oil and gas projects immediately. They say it is time the fossil fuel industry goes into a “managed decline.”

“With the global reliance on fossil fuels underpinning so many of the world’s current crises, the UN Secretary-General is absolutely right; investing in more would be madness,” says Juliana Gaertner from the Global Witness Gas Campaign.

In whatever way fossil fuel companies dress it up, they are throwing exorbitant sums towards prolonging the fossil fuel dependent world they have created.

But, she adds, this is exactly what the fossil fuel industry intends to do.

“Pull back the PR, tear away the greenwash, and unwrap the false promises - in whatever way fossil fuel companies dress it up, they are throwing exorbitant sums towards prolonging the fossil fuel dependent world they have created.”

At the very least, Gaertner says, these companies could be putting this money towards a genuine transition to renewables.