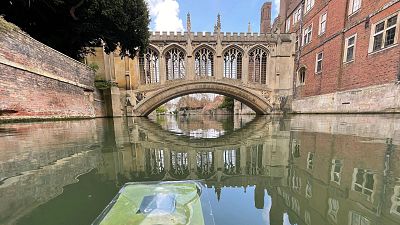 The floating artificial leaf in the River Cam, near St John's College Cambridge   -   Copyright  The University of Cambridge
By Charlotte Elton  •  Updated: 19/08/2022

Cargo ships could one day be powered by ‘artificial leaves’ floating out at sea.

University of Cambridge Researchers have designed lightweight, flexible devices that use solar technology to convert light into fuel.

At just 1mm thick, the ultra-thin ‘leaves’ can float on water - and could eventually go “almost anywhere,” according to study lead Professor Erwin Reisner.

“Moving [renewable energy] production to open water would mean that clean energy and land use aren’t competing with one another,” says Reisner.

“In theory, you could roll up these devices and put them almost anywhere, in almost any country, which would…help with energy security.”

How do the solar leaves work?

The artificial leaves are different to the solar panels you might buy for your home.

This emulates photosynthesis, the natural process by which plants convert sunlight into food.

The floating leaves are huge step forward for sustainable energy

In 2019, the Cambridge team created an artificial leaf that makes ‘syngas’ - a type of fuel used in the production of chemicals and pharmaceuticals.

But the leaf was bulky, heavy and not waterproof. The new prototype is a massive leap forward.

“We wanted to see how far we can trim down the materials these devices use, while not affecting their performance,” says Reisner.

“If we can trim the materials down far enough that they’re light enough to float, then it opens up whole new ways that these artificial leaves could be used.”

The researchers used thin-film metal oxides and ‘perovskites’ - materials that can both capture energy from light and be coated onto flexible plastic. The resulting ‘leaves’ floated successfully on the river Cam.

Tests showed that they can split water into hydrogen and oxygen, or reduce CO2 to syngas.

Is the floating leaf technology scalable?

The leaves aren’t quite ready for commercial applications. The team is still working on a method to collect the gas bubbles from the leaf.

However, the new breakthrough is an “early step” to upscaling the technology, says Dr Virgil Andrei, co-lead author of the paper.

Why do we need solar fuel?

Electricity from photovoltaic solar is a major driver of the clean energy transition.

But some industries can’t be electrified easily. Around 80 per cent of global trade is transported by cargo vessels powered by fossil fuels, and much chemical production also relies on fossil fuel.

To decarbonise these industries, we need a clean liquid fuel as a substitute.

Scientists have developed biofuels - but these often rely on growing large non-food crops, with negative consequences for the environment. They are yet to be successfully scaled up.

Solar fuel - ‘liquid sunlight’ - could be the answer.

These fuels would still generate emissions when burnt - but their generation would be emissions-free, a huge step forward from mining and drilling dirty fuels.