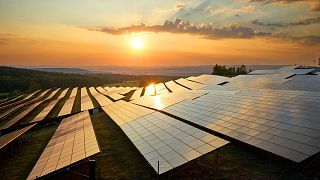 Currently the longevity of solar panels is one of the major drawbacks of the technology.   -   Copyright  Getty via Canva
By Marthe de Ferrer  •  Updated: 17/04/2022

A material commonly used in solar panels has been found to repair itself when damaged - and scientists think this ability could be vital for the future of clean energy.

The substance, called antimony selenide, is what’s known as a solar absorber material. This means it can be used to harness solar energy and convert this power into electricity.

The team at the University of York, UK who made the discovery are now looking at how this technology could be used to create longer-lasting solar panels, which could potentially 'self-heal' when damaged.

One of the biggest hindrances to progress in this type of technology is the reliability and longevity of cells. Currently, solar panels have an average lifespan of between 25-30 years, so developing technology which can repair itself could be a crucial breakthrough.

Antimony selenide’s surprising self-healing capability is similar to when a starfish or reptile regrows a limb after an accident, explains Professor Keith McKenna who led the research.

"The process by which this semi-conducting material self-heals is rather like how a salamander is able to re-grow limbs when one is severed,” he says. “Antimony selenide repairs broken bonds created when it is cleaved by forming new ones.

"This ability is as unusual in the materials world as it is in the animal kingdom and has important implications for applications of these materials in optoelectronics and photochemistry."

What is the future of solar power?

Solar power is a technology people around the world are keen to perfect. With many governments pledging to reach net-zero over the next 10 to 30 years, securing reliable alternatives to fossil fuels is essential.

Researchers at GlobalData believe that space-based solar power (SBSP) could be the key to a total transition to green energy. SBSP involves using mirror-like reflectors, which are positioned on satellites moving around Earth’s orbit. These reflectors would concentrate the sun’s energy onto solar panels, allowing for power to be harnessed outside of daylight hours.

For now, SBSP is purely conceptual, but scientists do believe it could be a reality soon. The US Naval Research Laboratory conducted its first test in this field in May 2019.

Earlier this year scientists in South Korea created the first fully transparent solar panel, which could be a major step forward for domestic solar power usage. Traditionally, they are opaque because of the semiconductor layers within the cells, but researchers at Incheon University were able to use titanium dioxide and nickel oxide instead.

Last year double-sided solar panels were developed for the first time too, which were found to be 35 per cent more effective.