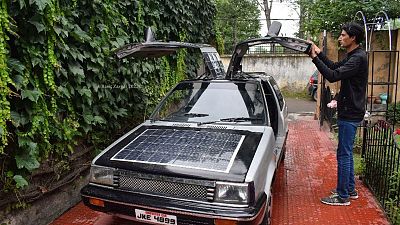 An Indian man has gone viral for his creation of a solar-powered car, a solo project 11 years in the making.

Bilal Ahmed, a maths teacher from Srinagar in Kashmir, made it his aim to build a ‘luxurious’ and sustainable vehicle that is not just for the super wealthy.

Soaring fuel prices in the northern region have made his invention even more timely. While Tesla’s continued absence in India means the solar panel-adorned design has caught the imagination of car enthusiasts.

“Cars like Mercedes, Ferrari, BMW are just a dream for a common person. Only a few people are able to afford it while it remains a dream for others to drive such cars and roam in [them]. I thought of something to give a luxurious feel to the people,” he told the Rising Kashmir newspaper.

It’s been hailed as the Valley’s first solar car. The Jammu and Kashmir region of India is one of the country’s coolest, with typically “gloomy” weather, he said. “I used solar panels which can give higher efficiency even in low sunlight days.”

Ahmed’s creation is all the more remarkable for having been achieved without any external funding. The father-of-two says he has spent more than Rs 15 lakh (€18,200) building the fully-automatic car, after studying various 1950s models and networking with other experts.

“When I began the project and even after I completed it, no one provided me with any financial assistance; if I would have got the necessary support, perhaps I would have been India’s Elon Musk,” he told reporters.

What makes the solar-powered car so special?

The first notable thing about Ahmed’s car is that nearly every available surface is covered in solar panels, from the bonnet to the rear windshield.

Maximising the amount of energy that could be generated from the sedan’s relatively small surface area was key to his success. The entrepreneur opted for monocrystalline solar panels, in which each photovoltaic (PV) cell is made of a single silicon crystal. These produce more kilowatt-hours of electricity than the other main kind of solar receptor, polycrystalline panels.

The second, perhaps even more striking design feature, is that the car has ‘gullwings’ which open upwards. Despite the DIY aesthetic, it looks like it could take flight with a strong enough gust.

Former Chief Minister of Jammu and Kashmir Omar Abdullah compared it to the famous ‘Back to the Future’ film car on Twitter.

This innovation isn’t for time travelling however, but to enable the doors to catch as much sunlight as possible, by facing the sky. Ahmed explained that the panels can change direction as the sun moves, operated by remote control.

“The braking system will [also] regenerate the power to its batteries to save energy,” he said. “It is eco-friendly and works on free energy resources. It has a huge potential to revolutionise the market.”

Can it generate green jobs for Kashmiri youth?

As well as a lack of [state] funding, Ahmed has been hampered by a shortage of equipment. The car uses a lead acid battery, but could be upgraded to a lithium battery with the right tools.

"Lack of exposure among the local mechanics is another problem. The knowledge they possess is limited which makes it really difficult to explain [to] them," he told Rising Kashmir.

The inventor is hoping to start a company to mass produce the vehicles, which could also be a golden employment opportunity for young people in the region. It will be called YMC - the initials already printed on the side of the prototype - after his children, Yosha and Maisha.

While backers are needed, Ahmed already has the support of the innovation centre at the National Institute of Technology in Srinagar.

Saad Parvez, head of the IIED centre said, "The IIED centre will help him to develop his innovation and will connect him with the industries or forum that can help him. Our local innovators need motivation and a marketplace. The challenge is to market the innovation."