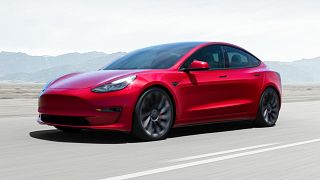 Electric cars are only as green as their power supply, and in Australia, that’s not very green at all.

Just 24 per cent of the nation’s energy comes from renewables, while the vast majority stems from fossil fuels like oil, coal and gas.

But as the green car revolution gets underway, one Aussie inventor is looking to the sky for a renewable - and portable - charging solution.

“We're taking a vehicle to the remotest parts of Australia and charging it with a lightweight technology that can generate electricity from sunlight,” says Paul Dastoor, Professor of Physics at the University of Newcastle, New South Wales.

“It strikes me that this is actually an ideal test bed to give us information about how we would go about using and powering technology in other remote locations - for example, in space.”

Can you power a Tesla from the sun?

To test his theory, Dastoor will use 18 specially-designed solar panels to power a 15,000km journey around Australia in a Tesla electric car.

The printed panels offer a lightweight solution to conventional solar cells, allowing the energy system to be rolled up and stored in the back of the vehicle.

And at just €7 per square metre, they provide a cheaper alternative too.

“As far as the Tesla is concerned, it will be the same as plugging into any wall plug that it would normally plug into,” says Dastoor. “It won't know that the energy is coming from printed solar cells."

The innovative panels are produced on commercial printers originally used for manufacturing wine labels. Dastoor hopes the Australian-made product will inspire locals to think again about the potential of solar energy.

“The fact that we show a Tesla driving around Australia, powered by brand new Australian solar technology, it's going to do an awful lot in terms of raising the profile of solar,” continues Dastoor.

“I think people want this. I think the community is seeking these sorts of answers to the problems it's being presented with, day in, day out, around climate change."

What does Elon Musk think about the project?

The Charge Around Australia (CAA) team will visit 70 schools on their 84-day trip, giving students a taste of what the future may hold.

When asked about the Tesla founder, Elon Musk, Dastoor remains optimistic that he will support the project.

“I hope that if he finds out about it, he would be very pleased,” adds the professor.

“It shows how our innovative technology is combining with his developments to provide new solutions for the planet."

Watch the video above to find out more about the solar-powered Tesla.