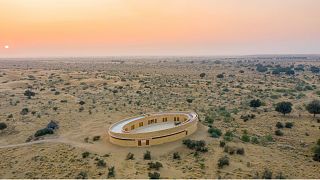 In the heart of the Thar desert, India students brave blistering 45 degree temperatures to attend class.

But the Rajkumari Ratnavati Girls School doesn’t need any air conditioning as its unique sustainable design keeps it cool.

In Jaisalmer, north-west India, just over a third of women and girls can read and write.

Staff at the Rajkumari school - which hosts more than 400 students aged between four and sixteen - hope to improve this alarming statistic.

Thanks to the school’s unique oval build they can study in peace despite sweltering temperatures and regular sandstorms. It was designed by New York based architect Diana Kellogg.

"As a female architect designing for women, I looked at feminine symbols across cultures and specifically symbols of strength," Kellogg told architecture magazine Dezeen.

"I ultimately landed on this oval shape that is representative of femininity and resonated with me as the formulation of infinity.

"I knew I wanted to do a building that simultaneously blended and grew out of the natural landscape, much like the Jaisalmer sandstone."

A sustainable and symbolic building

The 836 square metre structure is sustainable, as well as symbolic.

"I wanted the design of the school to provide shading for the girls in the courtyard," Kellogg said.

“The ellipse shape seemed the most natural way to do this.”

The building is powered by rooftop solar panels, which also work as a shade-giving canopy. It is cooled by a geothermal energy system, and lime-plastering on the inner walls keeps it insulated.

Jalis (perforated lattice stonework) protect students from the sandstorms that whip through the area while allowing natural sunlight in. Water harvesting systems collect and recycle rainwater throughout the school.

It’s designers wanted the entire community to benefit from the school. Constructed by local builders using local sandstone it is the first in a planned complex of three buildings.

Named the Gyann centre, it will host The Medha, a performance and art exhibition space with a library and museum. The three buildings will also contain the Women’s Cooperative, a learning space where local artisans will teach women weaving and embroidery techniques.

The project was commissioned by CITTA, an American non-profit dedicated to supporting development in “some of the most economically challenged, geographically remote or marginalised communities in the world.”