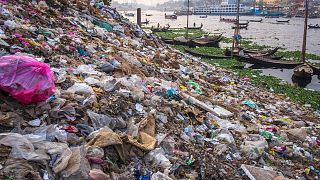 Rubbish dumping along river banks is one cause of pharmaceutical pollution.   -   Copyright  Getty Images
By Lottie Limb  •  Updated: 15/02/2022

More than a quarter of the world’s rivers sampled in a major new study are found to be polluted with drugs to a toxic degree.

Pharmaceutical pollution poses a “global threat” to environmental and human health, according to the researchers. When antibiotics get into our waterways they make it more likely for bacteria to develop antimicrobial resistance - which is said by the WHO and UN to be one of the biggest dangers to humanity.

In the first truly global investigation into the issue, scientists measured the concentration of 61 active pharmaceutical ingredients (APIs) at more than 1,000 sites along 258 rivers spanning every continent - 104 countries in total.

Only two places in the world were unpolluted, according to the study published in the journal PNAS: Iceland and a Venezuelan village where the Indigenous people do not use modern medicine.

"We've known for over two decades now that pharmaceuticals make their way into the aquatic environment where they may affect the biology of living organisms,” explains Dr John Wilkinson, co-leader of the study based at the University of York in the UK.

“But one of the largest problems we have faced in tackling this issue is that we’ve not been very representative when monitoring these contaminants, with almost all of the data focused on a select few areas in North America, Western Europe and China.”

Madrid has the most medically polluted river in Europe

Madrid has the most polluted river in Europe, ranking in the top 10 per cent of global places with the highest cumulative concentrations of APIs. Glasgow also came in the top 20 per cent globally.

Elsewhere, hotspots of toxic pharma water were found in Lahore in Pakistan, La Paz in Bolivia, Addis Ababa in Ethiopia and Dallas, US.

There is a strong correlation between the socioeconomic status of a country and higher pharmaceutical pollution in its rivers.

There is a strong correlation between the socioeconomic status of a country and higher pharmaceutical pollution in its rivers, with lower-middle income nations like India and Nigeria the worst affected. The researchers suggest this could be because people in these countries can afford to buy medicines, but lack expensive sewage systems which filter out the drugs.

Pharmaceutical factories are also leaking their chemical compounds into rivers. One site in Bangladesh - downstream of a drug manufacturer - had levels of the antibiotic metronidazole more than 300 times above the safe target (the biggest breach in the study).

More than 1.2 million died globally in 2019 from bacterial infections that were resistant to antibiotics, according to a study published last month. There are close links between countries - largely in South Asia and sub-Saharan Africa - with the worst drug pollution and those suffering the highest impact from antimicrobial resistance (AMR).

Wilkinson told the Guardian that AMR could well bring a new pandemic.

Caffeine and antidepressants are among drugs found in rivers

The most frequently detected APIs were carbamazepine, an anti-epileptic drug which takes time to break down, the diabetes drug metformin, and caffeine - which the researchers acknowledge comes from drinks as well as medicines. All three were found in more than half of the sites.

Concentrations of at least one API at 25.7 per cent of the sites overshot the limit safe for aquatic life. These biologically active compounds can turn male fish female, disrupt reproduction and even change animals’ heart rates.

Other contaminants found at potentially harmful concentrations include the beta-blocker propranolol and loratadine, an antihistamine for allergies. Antidepressants citalopram and venlafaxine were also picked up on all continents except Antarctica.

The researchers hope that by increasing monitoring of pharmaceuticals in the environment, they can develop strategies to limit the concerning effects caused by these pollutants.