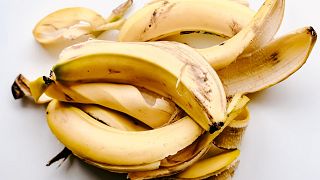 Dried banana peels zapped with a powerful lamp can be instantly turned into renewable energy.

Scientists have discovered a new method of extracting hydrogen that could significantly boost supplies of the gas from biomass. It is also possible with corn cobs, coffee beans and coconut shells.

It comes as Europe ramps up its hydrogen economy on the road to carbon neutrality by 2050.

According to the EU’s hydrogen policy, ‘renewable’ hydrogen can be made from biomass (plant and animal matter) provided certain sustainability criteria are met. One major concern with biomass is that it can actually release more CO2, for example where forests are logged, to fuel power stations.

But the team of Swiss-based scientists explain that all of the products from their photo-thermal (light and heat-based) technique can be captured, making it economical and climate-safe.

“The relevance of our work is further heightened by the fact that we are indirectly capturing CO2 stores from the atmosphere for years,” writes Dr Bhawna Nagar, one of the authors from the École Polytechnique fédérale de Lausanne (EPFL) in Switzerland.

“We have converted that into useful end products in no time using a xenon flash lamp.”

What are the benefits of converting bananas and other biomass in this way?

There are currently two main routes of chemically converting biomass using heat: gasification and pyrolysis. Gasification blasts the organic material to temperatures of 1000°C, converting it into syngas - a mix of hydrogen, methane, carbon monoxide, and carbon dioxide - which is used as biofuel. A solid residue of carbon, known as ‘biochar’ or charcoal, is left behind.

Pyrolysis decomposes the biomass at lower temperatures of 400 to 800°C, in containers without oxygen. But this requires very specific reactors that can handle high temperatures and pressures, the scientists explain in the journal Chemical Science.

A simpler method is now at hand in the form of photo-pyrolysis using a xenon lamp. This emits a bright white light, like that once seen in photographers’ studios. One powerful flashlight shot can trigger biomass conversion in just a few milliseconds.

First, the banana peels must be dried at around 100°C for 24 hours, then ground and sieved to a fine powder before being placed in a stainless steel reactor.

“Each kilogram of dried biomass can generate around 100 litres of hydrogen and 330g of biochar, which is up to 33 weight per cent of the original dried banana peel mass,” says Dr Nagar.

This splitting of natural biomass into gas and charcoal is offered as a “smart, rapid and eco-friendly” solution to hydrogen production. The charcoal is valuable too as it can be added to soil to improve plant health, or stored as a carbon capture strategy.

Next, the scientists hope their method could be scaled up and applied to industrial waste such as tyres. It could even pave the way for solar photo-pyrolysis - harnessing the sun’s energy to be even more sustainable.