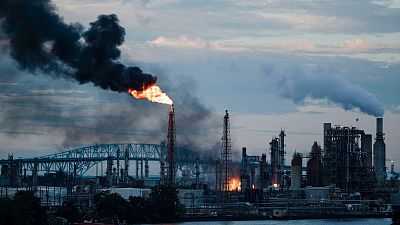 Researchers at Canada’s University of Waterloo analysed the ‘Carbon Underground 200’, a database of the world’s largest coal, oil and gas companies, to find the most powerful investors.

Combined, these energy companies own 98 per cent of known fossil fuel reserves, which would emit 674 gigatons of carbon if burned. That’s nearly three times the global CO2 emissions limits needed if we are to hold global warming to within 1.5C, in order to avert the most devastating impacts of climate change.

Looking at the CU200 list - compiled by sustainable investment firm FFI Solutions - the researchers found that only 10 shareholders own 49.5 per cent of the potential emissions from the likes of Saudi Aramco, ExxonMobil and BP.

"Individually, reducing the demand for fossil fuels by driving and flying less and turning off the air conditioner are great. We should keep doing that. But we also need to reduce our production of fossil fuels, which these 10 actors can lead,” says head researcher Truzaar Dordi.

“Without them, we simply won't have what it takes to meet our emissions targets and avoid catastrophe."

Which 10 financial institutions own the fossil fuel reserves?

The new study, published in the Environmental Innovation and Societal Transitions journal, reveals that governments and prominent American investment managers are among the biggest shareholders in fossil fuel firms.

The researchers point out that the Indian government and kingdom of Saudi Arabia both signed the Paris Agreement in 2015, which aims to stop us passing the critical 1.5C threshold.

These shareholders wield a huge influence over the fossil fuel industry.

According to the CU200, based on reserves emissions data for companies at the end of 2020, Saudi Aramco has by far the biggest oil and gas reserves, capable of emitting 107 gigatons of carbon. It was followed by Russia’s Gazprom at 38 gigatons CO2, then Rosneft.

Coal India is the top coal company, with reserves capable of releasing almost 100 gigatons of CO2.

What does it mean for decarbonising our energy systems?

"A concentrated number of investors with the potential to influence the trajectory of the fossil fuel industry is either a problem or an opportunity, depending on how you see things,” says Dordi.

On the plus side, only a small number of entities need to act to stop fossil energy giants extracting remaining reserves. The researchers say these financial actors can exert their influence, “by constraining access to financial capital or by influencing corporate strategy through active ownership.”

“If they’re serious, capital markets can enable a low-carbon transition within the top coal, oil and gas reserve owners in the world,” adds Dordi.

Investors and the government can be at the forefront of change if citizens and clients urge them to decarbonise.

He points to recent pledges to reduce carbon exposure in investment portfolios as a sign that finance firms are moving in the right direction. “This shows us that both investors and the government can be at the forefront of change if citizens and clients urge them to decarbonise.”

But, researchers conclude, the financial system is unlikely to make the transformative changes that are needed to respond to the climate crisis unless “disciplined” to do so.

CEO of FFI Advisors Chris Ito tells Euronews Green, “With respect to accelerating the energy transition, we applaud Truzaar and his research team for directing investors’ attention to the most impactful financial actors.

“These firms can play a key role in influencing fossil fuel companies to transition their business models and align with a low-carbon economy. We believe these firms can, and should, be a stronger voice for their investors, who increasingly recognise the risks and opportunities associated with net-zero.”