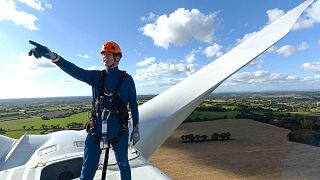 Prices for wind and solar power in major global markets have climbed nearly 30 per cent in a year, as developers struggle with "chaotic" supply chains and surging costs.

This has impacted everything from shipping to parts to labour, according to a report published on Wednesday.

Contract prices for renewables jumped 28.5 per cent in North America and 27.5 per cent in Europe in the last year, according to a quarterly index by LevelTen Energy that tracks the deals, known in the industry as power purchase agreements (PPAs).

These kind of market disruptions during the COVID-19 pandemic have worsened since the Russian invasion of Ukraine, reversing a decade of cost declines for the renewable energy sector.

There is a risk higher costs could slow demand growth at a time when the United Nations has called for clean energy to expand more rapidly to avoid the worst effects of a warming climate.

These kind of market disruptions have worsened since the Russian invasion of Ukraine, reversing a decade of cost declines for the renewable energy sector.

"We still need keep the foot on the gas here," Rob Collier, vice president of LevelTen's energy marketplace, said in an interview.

Why are renewable energy costs rising?

Aggravating challenges in North America, the sector is uncertain whether US lawmakers will extend tax breaks for renewable energy facilities, as part of President Joe Biden's climate change agenda.

Developers also are worried about a US Commerce Department investigation initiated this year that could result in tariffs on solar panel imports from Asia, pushing up costs.

In Europe, the war in Ukraine has led governments to try to reduce dependence on natural gas from Russia, further boosting robust demand for renewables.

The war has been "the last straw for a market where there was already a lot of price tension," Oscar Perez, a partner at Spain-based fund manager and renewable energy developer Q-Energy, said in an interview.

The war has been the last straw for a market where there was already a lot of price tension.

Higher costs for renewables in Europe, along with the continent's aggressive climate policies, should boost the appeal of pricier technologies like green hydrogen and biofuels, according to Raymond James analyst Graham Price.

For now, soaring prices have not slowed demand, LevelTen said. In a poll the company conducted of 21 sustainability and energy advisers, 75 per cent said their clients have accelerated or maintained procurement plans, according to the report.

"It's not about demand," Luigi Sacco, head of PPA origination at Milan-based Falck Renewables, said. "Demand is there but supply is struggling a bit in several markets."

One factor luring buyers to renewables is the soaring cost of fossil fuels.

"The ready alternative to renewable generation right now is gas, and gas prices are up 100 per cent as well," Farr said.

"So you pick your poison."