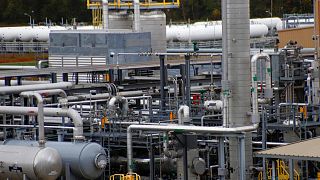 The European energy crisis is escalating rapidly and with natural gas supplies in short supply, Europe is relying heavily on liquified natural gas (LNG) to meet its needs.

Russia usually supplies around 40 per cent of Europe’s natural gas, used to heat homes and generate electricity. After the country’s invasion of Ukraine, the EU is now looking to cut its reliance on Russian fossil fuels by two thirds by 2023.

With the EU slashing these imports, LNG from the US and other countries around the world is being brought in to fill the short term gap.

So what is this fossil fuel and is it really a solution to meeting Europe’s energy needs?

What is liquified natural gas?

Europe relies heavily on natural gas for its energy, but many people and businesses are too far away from gas fields for pipelines to be practical or cost-effective. Or, as is the case in Europe right now, those sources closer to home can’t be used.

To get around this problem, gas is cooled to -162ºC to turn it into a liquid that can be more easily stored and shipped overseas. It shrinks the volume of the gas making it around 600 times smaller and, in its liquid state, LNG won’t ignite.

This liquified gas can be transported longer distances, shipped by sea in tankers. Once it reaches its destination, it is turned back into a gas then piped to homes, businesses or industries to be burnt for energy and heat.

In the absence of its usual natural gas supply, Europe has been looking to import LNG from the US, Algeria and Qatar. The US, in particular, has stepped up its exports with the number of US ships carrying this fuel to Europe and Turkey reaching a record high in the first two months of 2022.

Is LNG a good alternative to Russian fossil fuels?

LNG may burn the cleanest of all fossil fuels with much lower carbon emissions than coal or oil but extracting and transporting it leads to methane leakage. Methane is the second biggest cause of climate change after carbon emissions.

The US has in the past claimed that its fuel has less of an impact on the climate than Russian gas sent to Europe through leaky pipelines - but there is little evidence comparing the two.

The Biden administration is also reportedly reluctant to increase its exports to Europe because of concerns about the impact on climate change. Some White House officials have argued that it goes against efforts to wean the US off of fossil fuels.

Experts have said that the world’s largest exporters of LNG are already producing as much as they can. They believe there might not be enough of this fuel to meet all of Europe’s energy needs with the US already trying to buy non-Russian natural gas to keep up with demand.