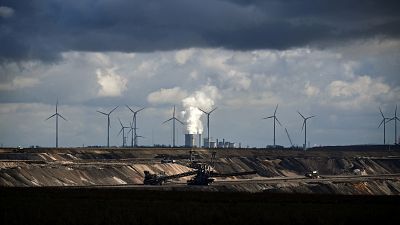 Nearly one-tenth of the world’s electricity now comes from wind and solar, according to a new analysis by London-based thinktank, Ember.

Wind and solar power have doubled in the last five years and the rise of renewables has driven coal power to drop by a record 4 per cent.

In the EU, wind and solar power made up almost 20 per cent of all energy generation in 2020, twice the global average. This meant that renewables generated more energy than fossil fuels in the bloc for the first time ever last year.

Among G20 members, only the UK’s use of wind and solar was higher at 29 per cent. But some EU nations are doing better than others. Wind turbines and solar panels make up as much as 63 per cent of Denmark's and 33 per cent of Germany’s power.

“What's impressive from our analysis is that the majority of countries across the world are now building wind and solar,” Dave Jones, global programme lead at Ember, told Euronews Living.

“And that adds up - a tenth of the world's electricity last year came from just wind and solar, and that's doubled in just five years.”

According to Jones, although Europe is among the world’s leaders, this shows that the continent is not alone in its transition to clean energy.

“Other countries have not just made pledges, but are actively undergoing their own electricity transition.”

The global growth of wind and solar energy has also pushed the use of coal to fall by record amounts. In the EU, the use of coal has nearly halved in the last five years reducing the bloc’s total greenhouse gas emissions by around 7 per cent.

China was the only G20 country to see a large uptake in the use of coal in 2020 as increases in energy demand outpaced its transition to clean electricity.

However, the analysis also found that emissions for the global power sector are still higher than in 2015 when the Paris climate agreement was signed. The demand for electricity around the world has grown by 11 per cent in the last five years and, especially in Europe, fossil fuels like natural gas have been brought in to fill the gap.

We already know now that by 2050 our energy system will have to change completely, fundamentally.

“It's one heck of an achievement for the EU to almost halve its coal generation in just a few years,” says Jones. But he explains that the analysis found the drop in coal power in Europe was only so large because some of that energy was now being produced by gas.

The EU has been criticised in the past for its stance on using gas to transition away from coal - but last week Frans Timmermans, the European Commission’s climate chief, said there was “no viable future” in the fuel.

“We already know now that by 2050 our energy system will have to change completely, fundamentally,” he said.

“At the end of that road, there will be no more space for coal, very little room for oil and only a marginal role for fossil gas.”

Jones agrees that renewable energy is the future adding, “to keep coal falling as fast, we need less coal-to-gas and more coal-to-clean.”

But, he emphasises, “that means stepping up wind and solar investment further.”

How have some G20 countries transitioned to clean energy faster than others?

Germany now generates the most electricity from wind and solar of any G20 country. Although it still remains reliant on fossil fuels for 44 per cent of its power, the speed at which it has transitioned to these renewables stands out.

The amount of power produced by wind and solar in the country has almost doubled since 2015. The analysis from Ember found that the nation has continued to pull away from the rest of the world in 2020 with three times the global average.

The electricity transition isn't something that can be done in a few years.

“Germany had a vision that it would switch from nuclear and coal energy to wind and solar energy, so much so, they have a dedicated name for it,” says Jones.

This vision, ‘Energiewende’ in German, means that policy focuses on what is needed to transition away from fossil fuels in the long-term, rather than just short term gains.

“The electricity transition isn't something that can be done in a few years, even in small countries, and can't just be at the whim of short-term election cycles,” he adds.

“That long term vision is where I think Germany was most different.”