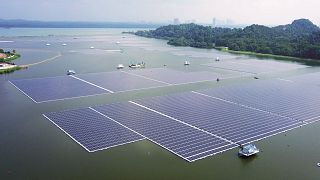 Singapore's floating solar farm on the Tengeh Reservoir has officially been opened.

Made up of 122,000 solar panels spanning 45 hectares, it is roughly equivalent to the size of 45 football fields. The 60 megawatt-peak solar photovoltaic (PV) farm is now officially one of the largest operational inland floating solar PV systems in the world.

The solar farm, installed by Sembcorp Industries, was deployed as part of Singapore's goal to quadruple solar energy capabilities by 2025, in a bid to help the country do its part to tackle the global climate crisis.

It may be one of the world's smallest countries, but the island-state of Singapore has a big emissions problem.

In fact the nation is one of the biggest carbon dioxide emitters per capita, and the densely populated nature of the city makes it hard to find the necessary space for green initiatives.

So Singapore has turned to water to house the solar panels needed to generate more renewable energy.

Earlier this year, another solar farm was built in the Johor Strait which separates Singapore from Malaysia. Around 13,000 panels were anchored to the seabed with the capacity to produce five megawatts of electricity - powering 1,400 apartments a year on average.

Singapore is undergoing somewhat of a transformation when it comes to sustainability. Despite being a city renowned for its unique urban biophilia, there's still a long way to go when it comes to green energy.

If the government's plans to increase solar energy use four-fold are successful, this would be enough to power approximately 350,000 households a year.