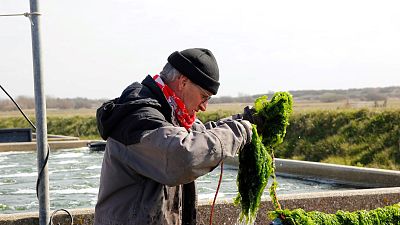 Food production needs to increase by 70 per cent in the next 30 years to feed a world population expected to reach 9 billion people.

However, traditional agriculture is facing increasing scarcity of water due to climate change. Freshwater - what we all drink, wash and cook with - accounts for only 2 per cent of all water on Earth, and we don’t even have access to most of it because it is locked away in glaciers.

In many areas, such as the Sub-Saharan region and the Sub-Indian continent, water is seriously scarce or heavily contaminated.

Even regions famous for their wet weather, such as the UK, are facing droughts due to low rainfall and increased water usage. In May, the UK saw only half of the average rainfall it would usually expect. According to the UK Centre of Ecology and Hydrology, last spring was the fourth driest ever recorded and the driest spring on record in many regions of England and Wales.

That’s why a farm on Scotland's West Coast is using the Atlantic Ocean to grow vegetables instead. Led by Glasgow-based startup Seawater Solutions they are using saltwater instead of fresh to grow food.

“We take this land, whether it’s degraded farmland or flooding-affected lands, and we then build an artificial saltmarsh ecosystem where we can extract food at the same time,” Yanik Nyberg, founder of Seawater Solutions, tells Euronews Living.

“We’ll pump seawater over this area, sometimes we flood it, and then we’ll begin to grow saline plants.”

These crops, called halophytes, thrive in waters with a high percentage of salt such as semi-deserts and seashores. Halophytes can be eaten or used as raw material for cosmetics, biofuels and sea-plant animal fodder. The saltmarshes where they grow protect the coast from flooding and erosion and absorb 30 times more carbon than rainforests do.

As an added benefit, Seawater Solutions reckons farmers who adopt their artificial ecosystems could sell carbon credits for over €2,600 per year for each hectare.

The Dowhill Farm, located in Ayrshire, focuses on species such as samphire and sea aster for food consumption. While these unusual vegetables remain a niche market, they aren’t just selling them to fishmongers or upscale restaurants anymore.

UK supermarket Tesco, which sells samphire during summer months, saw demand skyrocket by 80% in 2016 after the plant was featured on several popular TV cookery shows.

According to Nyberg, this means halophytes can be profitable in Britain, with Dowhill Farm selling produce for €22-32 per kilo with a yield of 20 tonnes per hectare - ten times as much as they would grow in an open field. Its artificial saltmarshes are powered by off-grid, renewable systems which make it economically viable and environmentally sustainable.

Solving the problem of soil salinisation

While the project in Scotland is labour-intensive and highly seasonal, in the Netherlands the Salt Farm Foundation has proven that ‘conventional’ crops such as potatoes and cabbages can tolerate higher amounts of salt than normal. Its Texel Farm, on the North Sea, grows crops using medium brackish water, which is a mixture of sea and freshwater.

The foundation is looking for a solution to the problem of soil salinisation, a worldwide phenomenon caused by climate change. This happens when seawater floods the land or seeps through the soil from below, so farmers end up with barren lands where they are unable to grow crops as they used to.

With its partners at the SalFar project, the Salt Farm Foundation has set up 16 fields in seven countries on the North Sea to test the salt tolerance of various crops. The researchers found that certain varieties of potatoes, cabbage, tomatoes, carrots, beetroots and strawberries have high salt tolerance. Brackish water was also found to be suitable for irrigating oats, barley, onions and sugar beet.

Feeling the effects of climate change

Prasath Waverijn-Ravikumar, project coordinator at the foundation, tells Euronews Living, however, that convincing professionals they can use brackish water for irrigation is proving a challenge.

“A lot of farmers and even scientists are afraid of introducing any kind of saline medium in agriculture,” he says. Many professionals are reluctant for fear of ruining the soil, although the application is tailored to each individual ecosystem.

Seawater Solutions has encountered the same challenges. Despite the success at Dowhill Farm, it has been difficult to involve neighbouring farmers and the local communities - as well as attracting and training newcomers.

“Even though we know it could make the land much more profitable, people see it as a risk as well, you have to break through that mindset,” Nyberg adds.

Scottish farmers, in fact, have not been as affected by climate change as their peers in other areas of the world, so they may not yet see it as a major threat to their livelihood. Similarly, the Salt Farm Foundation noted that there is low market penetration for its salt-tolerant ‘conventional’ crops because western Europe still enjoys somewhat abundant rains.

“But it has been projected that years like 2018 when there was extreme drought could become more frequent in the coming decades due to the climate change,” Waverijn-Ravikumar explains.

As climate change impacts Europe further, more decisions will need to be made to ensure the best future for the agricultural sector. While seawater irrigation may not be the only answer, the trendy halophytes grown by Seawater Solutions and the sturdy salt-tolerant crops studied by the Salt Farm Foundation have shown that thinking about water in a different way could provide the solution.