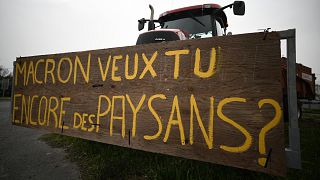 The costs of fertiliser, animal feed and fuel have shot up as a result of the Russian invasion. Farmers across Europe are feeling the brunt of the price hikes which are putting our food security at risk.

Roughly 30 per cent of the world’s wheat - a popular feed crop for animals as well as a human staple - comes from Ukraine and Russia. The devastation in Ukraine and sanctions against Russia have also led to higher prices and a short supply of the fertilisers used to increase crop yields.

“It is likely that gas prices will remain the key driver of fertiliser cost,” explains Minette Batters, president of the National Farmers’ Union (NFU) in the UK.

“Even before the war in Ukraine, fertiliser prices were rising rapidly due to the increasing cost of gas, with nitrogen fertiliser costing almost five times as much as it did this time last year.”

While costs for farmers are increasing, the price of their products is not, which is putting pressure on farmers. Experts have warned that it could lead to a food crisis.

Rising fuel prices, in particular, have led to growing unrest across Europe. Farmers have led protests calling for concessions to help them deal with high energy costs and fertiliser prices.

In France, roads to refineries were blocked with tractors and traffic was disrupted across the country. Tractors followed by protestors carrying vegetables and black flags blocked traffic in Athens, Greece on Friday.

The Greek government announced €1.1 billion in financial support for homes and businesses last week but farming associations say they were mostly left out of the package.

An estimated 150,000 farmers also took to the streets in Madrid on Sunday to protest the Spanish government’s inaction. Led by tractors, their banners read “Costs continue to rise” and “We are the ranchers on the way to extinction.”

The action was organised by the Rural Alliance which says it represents around 10 million people in Spain.

What are governments doing to help farmers?

French Prime Minister Jean Castex has promised €400 million in aid and tax cuts to help “improve the cash flow of farms” hit by the rising cost of animal feed. Russia’s invasion of Ukraine has disrupted shipments through the Black Sea which has pushed prices to record highs.

Agriculture minister Julien Denormandie added that, while supplies of fertiliser were enough to last the spring growing season, the government is aware that a plan will need to be developed for autumn. French farmers will receive state support on fuel costs too.

The Spanish government also says it plans to introduce measures to combat high energy and fuel prices later this month.

In the UK, the National Farmers’ Union (NFU) is calling for urgent action to keep supermarket shelves stocked.

“The government must act now, with a clear signal that food security is a priority for the nation,” the union wrote in a letter to the government earlier this month.

The NFU says it recognises that global sanctions are vitally important in ending the war. But additional import tariffs on Russian fertiliser, oilseeds and cereals will have financial consequences for farmers. The union believes the government has to act urgently to protect food security.

“We want to work in partnership with government to develop some short and long-term actions to maintain the confidence and stability across the UK’s food-producing businesses,” Batters adds.

“These include the urgent formation of a market monitoring core group to identify and resolve potential problems before they become critical and cause market failure, with the fertiliser market being particularly vulnerable, as well as preserving, protecting and prioritising gas supplies for food production and processing.”