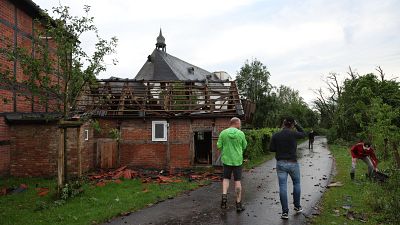 Extreme weather is set to become more frequent as climate change ramps up with floods, storms and fires becoming the norm.

This weekend, as Australians voted in a climate-conscious government and global leaders met at Davos with an eye on reducing carbon emissions, people from the Indian Ocean to the Mediterranean faced heatwaves and deluges.

Is climate change already in action? Let’s take a look at a weekend of extreme weather.

Hundreds of people were evacuated from the coastal South African province of KwaZulu-Natal after the area was hammered by heavy rains that flooded roads and damaged property.

250 people had to be evacuated from Tongaat and Tehuise in Durban, most of whom were elderly residents in care facilities. It comes just one month after one of the worst deluges on record killed 448 people and displaced over 6000 in the area.

Scientists expect this trend of extreme weather along South Africa’s southeastern coast to worsen as the Indian Ocean warms.

High temperature warnings were issued in 10 regions of Spain as the country sweltered in temperatures usually only seen in midsummer.

On Friday, May temperature records were broken in the city of Jaen, Andalusia, which logged a high of 40C.

An AEMET spokesperson said last week that, if officially confirmed, it could be the first ever heatwave recorded in Spain during the month of May.

An ongoing heatwave in Pakistan is causing farmers grief as the relentlessly high temperatures damage crops.

On Friday, Pakistan Meteorological Department said that the prevailing heatwave over central and upper Sindh is expected to persist till May 23, with daytime maximum temperatures rising to between 46 and 48C.

According to the Met Office, the temperature was recorded as high as 47C to 49C on Friday in Jacobabad, located in the northwest of Sindh province. The ongoing stress on water reservoirs, crops, vegetables and orchards likely to continue.

Pakistan’s national rice crop is predominantly fed by rain water and it is planted between May and June. The annual rice harvest which occurs from October to December is now at risk.

More than a billion people are at risk of heat-related impacts in the region too, scientists have warned, linking the early onset of an intense summer to climate change.

Meteorologists warned that heavy rainfall and hail were expected in western and central Germany on Friday, with storms producing wind gusts up to 130 kph. Storms on Thursday had already disrupted traffic, uprooted trees that toppled onto rail tracks and roads, and flooded hundreds of basements in western Germany.

On Friday, a tornado swept through the western German city of Paderborn, injuring dozens of people as it blew away roofs, toppled trees and sent debris flying for miles. 43 people were injured when the storm hit the city, with one woman said to be in a life-threatening condition.

Heavy storm damage was also reported in the nearby town of Lippstadt. A church steeple in was toppled and the German news agency DPA reported that more than 100 people were temporarily trapped in a local open air pool after fallen trees blocked the exit.

Meanwhile authorities in Bavaria said 14 people were injured Friday when the wooden hut they were sheltering in collapsed during a storm at Lake Brombach, south of Nuremberg. Several children were amongst the injured.

Police said two French citizens died after their motorised paraglider was caught by a strong gust of wind shortly after taking off Thursday from an airfield in Ballenstedt, 175 kilometers southwest of Berlin.

The streets of Baghdad were empty today as a massive sandstorm hit the Iraqi capital and several other provinces in the country.

A thick blanket of dust covered roads and buildings in Baghdad with an orange film as airports in the region were closed down.

Many people were taken to hospital and treated for breathing difficulties.

The sandstorm, which is expected to last for two days, is affecting several other middle eastern nations.

Iraq is prone to seasonal sandstorms, but experts and officials have raised the alarm in recent years over their frequency. They say the storms are being exacerbated by record-low rainfall, desertification, and climate change.

The World Bank has warned that Iraq could suffer a 20 per cent drop in water resources by 2050.