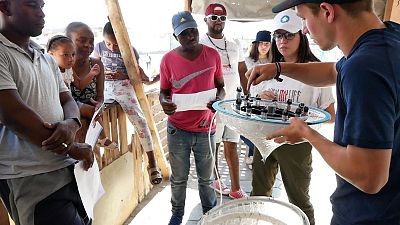 One in three people around the world do not have access to safe drinking water. This shocking statistic was released by UNICEF and the World Health Organisation in 2019, and it is likely that the pandemic has only worsened the situation.

It's clear that providing safe water for all is one of the most pressing problems in public health.

Now one design student thinks he has found a solution - and it's cheap to produce and free to use.

Even more impressively, he has passed on his design know-how to local people in Chile so they can build their own skylights using materials local to them, like old plastic bottles.

The Solar Desalination Skylight works by evaporating seawater using heat from the sun.

During the day, seawater trickles through a pipe into the bowl-shaped skylight. The salt and pollutants are removed and clean drinking water is extracting via a tap at the Skylight base. The leftover salt brine creates 'seawater batteries' which then power the light at night.

Henry plays down his invention, "It was not about trying to reinvent the wheel by any means. But it was about trying to combine these simple ideas, which have been around for hundreds of years, and apply them into a context that is not currently using something like this"

It was about trying to combine these simple ideas, which have been around for hundreds of years

Inspired by a country with very high water prices

Henry's design was inspired by a trip to shanty-towns in Chile, as part of his Masters degree at the Royal Danish Academy. "What was fundamental for my design was establishing a relationship with the local NGO, " he says. "They provided a lot of research, but also knowledge into life within these informal settlements."

Henry learnt from local NGO 'Techo' that every day in Chile 10 families move to shanty-towns because they can't afford formal housing. Alongside this, all utilities are privatised in the country, so water prices are the highest in Latin America.

To help low-income people have access to free and safe water, Henry taught them to make their own makeshift skylights.

Anger towards the high levels of inequality and the cost of living even led to violent protests in October 2020.

To help low-income people have access to free and safe water, Henry taught them to make their own makeshift skylights, as shown in the video above.

A bright future ahead

The Solar Desalination Skylight is a finalist for the Lexus Design Award 2021, a competition dedicated to empowering humans to make good things for the future of humanity and the planet. Projects that are finalised and awarded are chosen for their positive impact on human society.

Henry finished his studies and has now started working as an architect but he is still dedicated to using his skills for good.

Click on the video above to see Henry's amazing invention in action.