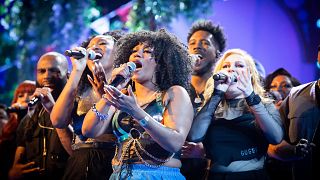 Is Gospel the next biggest trend in music? Fans of religious music are flocking to TikTok to show appreciation of the genre and it’s creating a special space for the spiritual community online.

Since May, there has been a 25 per cent increase in creations on TikTok with gospel music. Probably the most famous example is the use of ‘In the Sanctuary’ by Kurt Carr in videos where users combine the song with their life stories.

The platform is now bursting with different videos of people showing their love for religiously themed music. In the UK, performers like Harmonie London are making waves posting their busking videos.

Outside of the Christian tradition, the Jewish Miami Boys Choir have gathered tons of hits with their orthodox Jewish inspired single Yerushalayim. It’s got over 9 million views on TikTok and their hashtag #miamiboyschoir has more than 87 million views.

Much of the most popular music is rooted in the tradition of Black Gospel music, which has its roots in the religious music of Black slaves in the United States.

In the 1920s, Black Gospel was popularised with recordings that incorporated more blues stylings, going on to influence the sounds of artists like Elvis Presley. The genre has continued to evolve and is still an important part of many Black churches’ services around the world.

Why is the style increasing in popularity this year? David Mogendorff, head of UK Music Operations at TikTok has noted the embrace of faith-based music on the platform.

“We're seeing people from all around the world using this uplifting and joyful music as the backing track for a diverse range of content - from behind-the-scenes videos of life on tour, to comedic snippets that show what it's really like to be part of a modern-day choir,” he explains.

“It's been brilliant to see how everything from French gospel music to Orthodox pop is finding a community on TikTok, revealing some hugely talented performers who now have a growing global fanbase,” Mogendorff says.

A spiritual night out

The House Gospel Choir (HGC) is one group who have grown their following through the platform. The vocal group takes traditional gospel and combines it with house music to make divine dance floor anthems.

A big part of gospel’s popularity on TikTok is the platform’s design to let users combine the music with their own stories to create new narratives. With HGC, they’re similarly repurposing gospel traditions.

She quotes the American DJ Frankie Knuckles, saying “House music is church for people that have fallen from grace,” as she explains that many of the originators of the house genre were spiritual people from the church who imbued tracks with messages of hope and faith.

@housegospelchoir Screaming HAPPY 20th BIRTHDAY @bbc1xtra & Throwing it BACK to 2018 with this #bbclivelounge ? This platform has been a gift to us all since it’s launch and we’re so grateful that we get to celebrate all of the Beautiful People that support the culture & help us grow ☀️♥️? #housegospelchoir#peveneverett#roydavisjr#Gabriel#GarageClassics#RECHOIRED#musiciansoftiktok#choir#UKStandUP♬ original sound - House Gospel Choir

The brilliance of HGC’s music is it creates a space for spiritual rapture without the confines of a specific faith, Maddix believes. The group consists of more than 150 members who aren’t tied together by any one religion or church.

In this forum people can open up a modern conversation about spirituality that isn’t located in a single organisation.

“We've been able to have a conversation about faith and spirituality. For people that wouldn't necessarily go to church even, Tik Tok and social media has allowed us to extend that conversation,” Maddix says.

For Maddix, that conversation started in her youth, growing up in a Jamaican family in London. Every Sunday was soundtracked by old school gospel and reggae. Messages of belief in God are part of how Maddix learned to appreciate music. But it’s also how she learned to appreciate community.

“Modern life can be pretty lonely,” Maddix says. The community of gospel was a break from churn of modernity for her.

“Singing with other people, it's the perfect way to just know that you're not by yourself. And singing in harmony also gives you a sense of fitting in somewhere,” she says.

HGC provides a spiritual community without the complexities of a specific religious teaching. Before each gig, the band says a communal prayer. Often, Maddix will ask to borrow another member’s God for her prayer as a way of sharing mutual spiritual beliefs.

The whole group is in constant spiritual conversation with each other, and the result is an uplifting sonic journey through gospel and house styles. In December, HGC will take over popular London club KOKO for an evening of spiritual revelry.

Why are people so attracted to finding spiritual communities online?

Dr. Heidi Campbell is a professor of communications and digital religion at Texas A&M University believes that people who have religious feelings but don’t feel welcome in local communities, can find a home in online ones instead.

While secular beliefs became predominant in the 20th century, Campbell notes an increase since World War II of “believing but not belonging.” By that she means people who have religious beliefs but don’t feel the desire to be affiliated with official communities.

In the past, if you wanted to practice religion, you had to sign up to whatever local religious temple was in your vicinity.

“The digital age allows us to learn about religion online, and many people can even visit the temple or church they're gonna go to online before they even attend in person,” Campbell says.

“GospelTok is one of these trends that is opening up this community, both the art form as well as its beliefs, to people, and allowing them to connect with each other,” Campbell says, echoing Maddix’ experience of community through HGC.

While Christian belief in Europe and the US is dropping, there has been an increase in spiritual belief and those who feel religious without affiliation to a religious institution.

What this means, Campbell explains, is that sometimes social media stars can have more influence over the spiritual beliefs of people than ordained religious leaders.

Effective communicators with an understanding of digital media will always win out in the competition for interest, she says. “You get an intentional or unintentional challenge to religious authority.”

“Online authority is not just based on your offline knowledge. It's based on how well you know the platform, how well you're able to communicate and leverage the technology,” Campbell says.

Priests and vicars may bemoan the reduction in their authority, but Campbell also notes that this has allowed for a democratisation of religious principles. Lonely people who feel excluded by their local churches can find their community online.