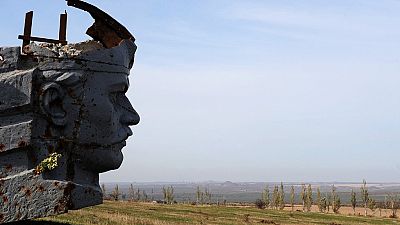 Human life isn't the only casualty of Russia's war in Ukraine.

With each passing week, churches, temples, museums, theatres, libraries and other cultural sites are being devastated by the fighting.

According to Ukraine's Ministry of Culture and Information (MKIP), Russia "consciously chooses" these targets "in order to achieve its main goal - to destroy the centres of Ukrainian culture.

"In this way, the invaders seek to destroy the identity and historical memory of Ukrainian people," they added in a statement sent to Euronews.

More than 370 cases of what it calls "Russian war crimes" against Ukraine's cultural heritage have been documented by the MKIP.

"These sad statistics," it says, "unfortunately, are growing almost every day."

According to the MKIP, since war broke out in February, nine cultural heritage sites in the regions of Donetsk, Kyiv, Sumy and Chernihiv have been completely obliterated, while 51 other objects of cultural significance have suffered severe damage and hundreds more have been harmed in the violence.

A further 42 memorials to historical Ukrainian figures and events of the 19th and 20th century, 26 museums and nature reserves, 74 houses of culture, theatres and libraries and 133 religious buildings lie in ruins.

"We must safeguard the cultural heritage in Ukraine, as a testimony of the past but also as a catalyst for peace and cohesion for the future, which the international community has a duty to protect," said UNESCO director-general Audrey Azoulay in a March statement.

One of those caught up in the conflict is Ukraine's Chernihiv Regional History Museum, which was struck by a suspected Russian missile in March.

Despite the best efforts of the MKIP to document the carnage, the fate of numerous other cultural sites in Ukraine remains unknown.

'This destruction is a war crime'

Such nihilistic acts of destruction are a war crime under the 1954 Hague Convention, which obliges countries to "refrain from all acts of hostility" against cultural property during armed conflict.

"Any damage to cultural property, irrespective of the people it belongs to, is a damage to the cultural heritage of all humanity, because every people contributes to the world's culture," reads the preamble to the 1954 convention.

Both Russia and Ukraine are signatories to this international treaty.

On 18 March, the UN organisation called on Russia to stop all forms of robbery, misappropriation and vandalism against cultural property, and to refrain from seizing movable cultural property in Ukraine.

Russia again has challenged these allegations, saying it has not committed war crimes in Ukraine.

'We are not waiting'

Ukraine's MKIP said it is currently acting to head off the onslaught of the country's cultural monuments.

"We are not waiting for the end of the war, but we are starting work on restoring the cultural heritage now," the government department said, noting how it was in constant dialogue with international partners, national authorities and local communities to save what it can.

MKIP has begun raising funds to help restore museums in the country and has called for charitable donations.

"These funds will be used for the needs of culture, arts, creative industries, book publishing, protection and preservation of cultural heritage," it said.

With the list of cultural collateral in Ukraine only growing, MKIP has asked for Russia to be expelled from UNESCO.

"Russia completely ignores all international agreements and rules, which once again proves its inability [of] civilized existence in the international arena," it claimed.