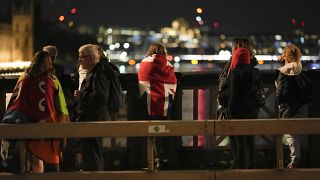 Queen Elizabeth II’s death shook a nation and the world and ahead of her funeral on September 19 her coffin will be on display in Westminster Hall for four days, giving the British public the opportunity to pay their final respects.

As the UK mourns an icon with the passing of the Queen, its people are busy engaging in one of their other iconic pastimes; queueing.

The Brits love to queue and there is currently a line of up to 8-kilometres long stretching along the River Thames in London, waiting to see the Queen’s lying in state.

Mourners were warned that the queue could take up to 30-hours, no one would be allowed to leave the queue to get refreshment, no deck chairs would be permitted, and no large bags could be taken into the hall. However, that hasn’t put off an estimated 750,000 people expected to join the queue, with people travelling from all over the country (and further afield) to be a part of history.

Meanwhile the queue has drawn much media attention. Flagship BBC current affairs radio show ‘Today’ devoted many segments to the queue, and media outlets from all over the world have interviewed queue partakers, who told touching stories about why they’re lining up to wait.

"I arrived here and started queuing at 9:30(pm),” one man in the queue told the Associated Press.

“They told us at night, where we queued up, there'd be 3 and half hours to get there and obviously it's been over 10 hours. Everybody in the crowd was impeccably behaved.

“There was no malice, everybody was friends.”

There is also a live queue tracker with which potential queue attendees can check how long the line is, but with all the hype why do the British love queueing so much?

What’s with the British and queueing?

With plenty of British good humour and camaraderie on display through cold, rainy London nights, the queue appears to symbolise something of the stoic British spirit that the Queen was considered by many to have embodied.

According to London School of Economics Criminology professor Tim Newburn, queues are fundamentally an egalitarian way of organising.

““It is fundamentally about fairness, taking your turn, first come first served,” says Newburn, who authored 'Orderly Britain: How Britain has resolved everyday problems, from dog fouling to double parking.'

While queueing may have come into vogue when large urban population centres developed in the industrial revolution, our modern image of queueing and its association with the UK comes from World War II.

“It goes back to rationing when goods and food were limited when people had vouchers and coupons,” says Newburn.

“Queueing became a way of life, especially for women who did the majority of shopping. It was an ever present experience. It became associated with the war effort.”

In 1952, more than 300,000 people queued to view the Queen’s father’s coffin, and in 1965 a similar number waited to see wartime Prime Minister Winston Churchill, but between these two state events queuing began to take on a darker tone.

“Later on in the British imagination it became associated with things that had gone wrong and queueing was a sign of failure. The better world after the war wasn’t coming fast enough,” explains Newburn.

Scenes of queueing during difficult times were repeated outside supermarkets during the COVID-19 pandemic (once the initial panic buying had subsided), and went to show that Brits hadn’t lost their touch.

However, the idea that it’s a uniquely British thing is something of a fiction.

“It’s interesting…the way that Britons associate themselves with queueing. People in other countries all over the world queue,” says Newburn.

“But one of the outcomes of this is that it will further the idea in people’s minds that the British are a nation of queuers.”

The corresponding, mildly hypnotic, media coverage and public obsession with the queue serves to reinforce a sense of British values at a time of crisis. The loss of a beloved figurehead like the Queen is a time of sorrow for the UK but with death comes rebirth and Great Britain can rediscover itself with a reaffirmation of the nation’s character through queuing.

To paraphrase Hamlet; the queue is the thing! The queue is a way to send a message to the world that the UK remains the same.