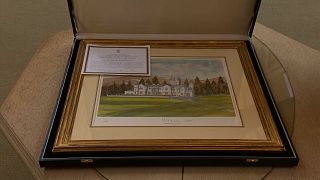 This painting by King Charles will go on sale on Thursday 20 October - the first time a painting of a reigning monarch is sold   -   Copyright  AP
By David Mouriquand  with AP  •  Updated: 19/10/2022

As King Charles III is settling into his new role, auction house Bonhams is preparing to sale an original artwork in Edinburgh… It will be the first time a print of a painting of a reigning monarch is about to go on sale.

The artwork painted by then-Prince Charles is going on sale tomorrow, Thursday 20 October.

King Charles III started painting in the 1970s, and he has said it transports him "to another dimension."

The print, numbered 18 out of 100, is a watercolour of Balmoral, the Queen's private residence, which was painted in 2001:

What were you expecting? A monument to surrealist glory? Francis Bacon levels of unsettling rawness?

Each reprint - no matter how bland - has King Charles’s original signature and a certificate of authenticity. This print is expected to break the last auction record of the now-King, set at £1,700 (approx. €1,900).

"We were quite flabbergasted to see the level of interest in this. We’ve had interest from all over the globe and we expect to go for well over the estimate,” says Managing director of Bonhams May Matthews.

Indeed, this isn't the first of his works that Bonhams is auctioning, but since the prince became King, interest has grown exponentially.

Feast your tired eyes on some of his previous tonics:

"I have to say, I have never seen as much interest not only in his work, but in any lot prior to an auction. The interest is really unprecedented," says Hamish Wilson, senior valuer, Bonhams Edinburgh.

"The auctions are a beguiling beast, and we look forward to seeing what comes on the day," says Wilson.

The artistic value of the print, however, might not be in line with its price, according to art critic Estelle Lovatt.

"It's not awful. It's not appalling. But it's not great," she says.

And who can put a price on that?

Wealthy collectors spend more than ever on art amid economic crisis