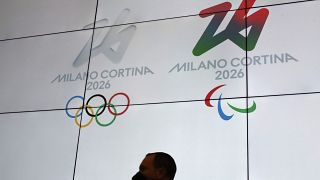 A pop singer and a classical instrumentalist were chosen to showcase the next Winter Olympics as Beijing gave the world a teaser for what to expect in four years.

Milan-born singer Malika Ayane and violinist Giovanni Andrea Zanon performed the Italian national anthem at the 2022 closing ceremony. After Beijing becoming the first dual Olympic city, holding both summer and winter games, it's fitting to see another duality play out. Milano-Cortina 2026 will be the first Olympics held in two distinct regions.

Head of Events for Milano-Cortina 2026, Christian Milici, said the choice of musicians symbolised the "harmonious dialogue between two opposites”.

Duality is a key part of the philosophy of 2026, with Milan being a renowned industrial hub and vibrant urban landscape, while Cortina is throbbing with nature and open spaces.

The 2026 Winter Olympics is being projected to be one of the first major post-pandemic sporting events in Italy and organisers hope they will mark a return to normal with fans, athletes and staff attending in an unrestricted manner.

Watch the moment Milano-Cortina won their bid below.

Jamal Edwards: coroner concludes cause of death was drug-related