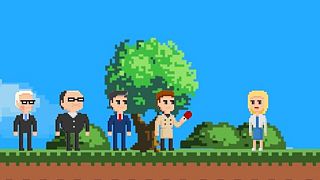 The UK’s economy may be crashing but now one company has turned the eventful first month of Liz Truss’ premiership into an enjoyable and wickedly satirical 8-bit game.

‘In Liz We Trust?’ from Construct allows users to engage in a riotous send up of a G7 nation’s catastrophic and self-inflicted economic decline in the aftermath of Chancellor Kwasi Kwarteng’s so-called mini-budget.

Players control Liz as she collects pounds from ordinary citizens of the UK and delivers them to the City of London as the PM delivers (or u-turns on) her commitments to unfunded tax cuts for the rich.

Along the way, Truss must avoid Leader of the Opposition, Sir Keir Starmer, Conservative Party plotter, Michael Gove, regional BBC journalists, and Governor of the Bank of England, Andrew Bailey. Get caught and it’s game over.

What is the new game based on Liz Truss?

“In Liz We Trust? was conceived and developed in three working days at a cost of just £750, which is even less these days than it was before the mini-budget,” says Tom Gullen, Co-Founder at Construct.

“Following the catastrophic fallout from Liz’s first weeks in power, we were naturally concerned as a small British business. We thought the best thing we could do was what we do best, with a satirical twist, to put a smile on people’s faces in otherwise grim times."

“We are sure it’ll be a big hit with everyone across the nation, from [Scottish National Party leader] Nicola Sturgeon to [Truss’s leadership rival] Rishi Sunak,” Gullen added.

The game is free to play, and players can log on to see how many coins they can amass to share with “hard-up bankers”.

Be warned: players only have three lives, begging the question: How many more lives does the Prime Minister still have before it's game over?