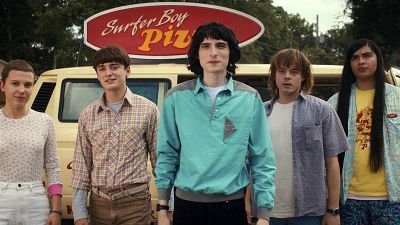 This week the US state of New Mexico announced a massive uptick in its revenue from movie production.

In the last fiscal year New Mexico earned €849 million from film productions, a 36 per cent increase on the previous year.

The state is so keen to attract filmmakers to shoot in its expansive deserts that it offers 25 - 35 per cent tax rebates, which many companies use to underwrite their productions.

Ever since runaway success ‘Breaking Bad’ was filmed there, the state has seen crews lining up to use its scenery as a backdrop for their dramas and comedies, with cultural phenomenon ‘Stranger Things’ the latest in a long line.

Location filming is also big money in Europe, where some unexpected places are cashing in on their natural assets and the similarity of their architecture to famous landmarks.

Big Hollywood, independent studios, and streaming giants are all flocking to European shores to make their next picture, but who’s making what?

With its long Adriatic coastlines, red roofed houses, and plethora of jaw-dropping, rustic scenery, Croatia is arguably the perfect place to look for filming locations.

HBO certainly thought so when it made much of the hit show ‘Game of Thrones’ in Dubrovnik and in locations around the Croatian countryside and coast.

Croatia has also been home to franchise servings like ‘Star Wars: The Last Jedi,’ and ‘Robin Hood: Origins’.

While ‘Mama Mia 2: Here We Go Again, set in Greece, was actually filmed on the Croatian island of Vis, a move which proved so controversial that the Greek Minister for Culture was forced to resign over it.

Between 2012 - 2019 Croatia raked in €134 million from overseas production companies, but in one year alone in 2021 the figure was €25.8 million. The Croatian government has even introduced 25 per cent subsidies for filmmakers to lure more productions to their shores.

Hungary may not be the first place to spring to mind when you think of filming locations, but the central European country’s dramatic countryside and capital city make the perfect backdrop for drama.

In 2019, the Hungarian production industry made a record €405 million and, after a brief pandemic lull, that figure had risen to €550 million in 2021 according to Hungary’s finance minister Mihály Varga.

To help things along, private investors are putting nearly €1 billion into a new superstudio called Astra Filmland in Mogyoród, which is set to be one of Europe’s biggest film studios.

Budapest makes the perfect (cheaper) double for other famous European cities. Large boulevard Andrassy has doubled as the Champs-Élysées in ‘Collette,’ while Bruce Willis fought Russians on the streets of Moscow there in the fifth instalment of ‘Die Hard’.

Blockbusters like ‘Black Widow’ and ‘Dune’ have also been filmed in Hungary, with Netflix, Lionsgate and Disney all queuing up to take advantage of the Hungarian government’s 30 per cent tax rebate scheme.

Northern Ireland is another place made famous as a filming location by 'Game of Thrones'. Although the show may now be a distant memory to some, it injected almost €300 million into the Northern Irish economy.

With an era-defining series under its belt, the production industry in this corner of the British Isles has gone from strength to strength. Viking blockbuster ‘The Northman’ was shot in Belfast Harbour Studios and on location in Northern Ireland, while spooky drama ‘The Woman in White’ was filmed across a number of Northern Irish National Trust properties.

The UK in general is on the up but it seems like Northern Ireland has its own particular charms. But with upcoming 'Game of Thrones' spin-off ‘House of Targaryen’ shot in Cornwall, the UK government is no doubt hoping for another regional hub to develop.

Speaking of England, London holds some of the most instantly recognisable locations in the country.

The UK capital may rake in €199 million a year from location filming revenues, but England's second city isn’t doing too badly either.

Manchester has featured in Marvel hit ‘Captain America’ as well as Spider-Man spin-off, ‘Morbius’. The city has stood in for London in ‘It’s a Sin,’ which told the story of the AIDS epidemic in the UK, and viewers of ‘The Crown’ will recognise the Manchester streets from Princess Diana’s visit to New York.

Thanks to its Victorian warehouses, mills, faded architecture and narrow backstreets, Manchester is one of the best places to make a film set in the recent-past.