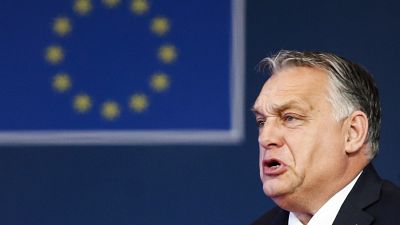 Governments in many European nations are spreading their influence into the arts in an attempt to shut down opposition and influence their populations   -   Copyright  Johanna Geron/AP
By Tim Gallagher  •  Updated: 12/01/2022

In October this year, the Belarusian Writers Union (UBW) was forcibly dissolved.

The union, which is associated with the European Writer’s Council (EWC), was disbanded by a high-court ruling following a set of procedures described as “Kafkaesque” by the union’s chair Barry Piatrovich.

The move was part of a wider crackdown of freedom of expression in the eastern European country following the election results of 2020, which saw president Alexander Lukashenko returned to office with 80 per cent of the vote.

The election, believed by many to be rigged, was greeted by widespread protests in Belarus. During the aftermath many protestors were imprisoned, with opposition figures either joining them behind bars or fleeing the country.

Upon news of the dissolution of the UBW, author and President of the EWC, Nina George, said “What we’ve witnessed since July 2021 is a strategic extermination mechanism against free speech, against democracy, against culture – and against the Belarusian nation.”

While such moves may be expected in the acknowledged authoritarian regime of Belarus, other countries - some even in the EU - also stand accused of censoring art as part of a wider tightening of authoritarian control.

Whether it’s targeting artists themselves or making political appointments for museum boards, all over Europe governments are accused of stifling freedom of expression and interfering in cultural production.

The Kremlin gets creative

“The government can label their asses if they like” was the defiant response of Pussy Riot member Nadezhda Tolokonnikova, on the news that she had been placed on the Russian government’s list of “foreign agents”.

The list, which includes popular Russian-language website Meduza as well as satirist Viktor Shenderovich and art collector Marat Gelman, carries a series of penalties for named individuals and organisations.

Those labelled as "foreign agents" are obliged to disclose sources of funding, undergo audits and are required to add a lengthy statement to news reports, social media posts and other materials specifying that the content was created by a "foreign agent."

Critics say the measure - which has been applied to 111 organisations and individuals - is designed to discredit government opponents. However, the Kremlin insists it is necessary to prevent foreign interference in Russian domestic affairs.

Hungary: a decade of cultural domination

In 2019 János Brückner's portrait of Hungarian president Viktor Orbán was removed from the Ludwig Museum, Budapest, without explanation.

The installation, which featured a large portrait of the president with two clocks for eyes and an accompanying statement, “This Too Shall Pass”, was considered controversial and risked offending the central European leader. Orbán has been in power, along with the ruling Fidesz party, for a decade.

The cultural sector in Hungary is predominantly funded by the state, a financial relationship which Fidesz has been accused of exploiting; in the last 10 years, many key positions in cultural institutions have been filled by Orbán supporters. One former minister, László Baán, currently occupies directorships at the National Gallery of Budapest, the Hopp Ferenc Museum of East Asian Arts, and the Museum of Applied Arts.

In 2018, Orbán announced he would “embed the political system in a cultural era,” a statement which has been reflected in events since.

That same year a production of “Billy Elliot” was cancelled following accusations that it promoted homosexuality. That summer another exhibition, this time of Frida Khalo’s work, was accused of promoting communism by a pro-government newspaper.

There have also been allegations that the Hungarian State Opera House and National Museum have both been banned from speaking to journalists without prior approval of the government.

Turkish writers in the dock

“As is the case with every dictator, Erdoğan’s hatred of artists and intellectuals is strong,” Zehra Doğan told freedom of expression NGO PEN America.

The artist, journalist and activist would know, having spent 600-days behind bars for painting a mural of a Turkish city destroyed by government security forces.

Ever since the failed coup d’etat in 2016, president Recep Tayyip Erdoğan has cracked down on writers and artists in the nation where East meets West.

Dozens of writers have been jailed since the coup, including novelist Aslı Erdoğan, mostly on terrorist propaganda charges. PEN America has ranked Turkey third in the world for jailing writers, beneath only China and Saudi Arabia.

Some authors have also been targeted by the Turkish legal system. In 2019 several writers including Elif Shafak were placed under investigation after an outcry on social media over the contents of their work.

Twitter users objected to passages that covered topics of sexual violence and child abuse. At the time Shafak said that the investigations into her work were “ironic” given the high numbers of child marriages in Turkey.

The award-winning author had already been tried and acquitted for “insulting Turkishness” in 2006 after a character in her novel, the “Bastard of Istanbul”, called the massacre of Armenians in World War One a 'genocide'.

Last year outcry greeted plans in Warsaw to replace Hanna Wróblewska, who had been director of Poland’s National Gallery of Art, Zachęta, for a decade.

800 artists and curators signed a letter to the culture minister and member of the ruling Law and Justice party (PiS), Piotr Gliński, objecting to the move which was seen as politically motivated.

The events have been framed as part of a wider war waged on the arts by Polish politicians, hoping to infiltrate a progressive sector and bring it into line with their socially conservative values.

The director of the Ujazdowski Castle Centre for Contemporary Art, also in Warsaw, has already fallen prey to the PiS’s watchful eye. In 2019 director Małgorzata Ludwisiak was replaced by a government appointee in an unusual move which reportedly bypassed the normal selection process.

Her successor, Piotr Bernatowicz, received criticism a year later for purchasing controversial artworks including a painting by Jacek Adamas, Tonfa (2018), which has been perceived as homophobic.

The open letter to Gliński was ignored and Wróblewska’s replacement, Janusz Janowski, has been in situ since January 1st this year.

The appointment has been fiercely criticised with art historian Magdalena Moskalewicz describing Janowski as having “No expertise in contemporary art.”