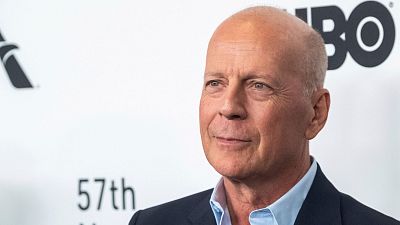 How do we justify Bruce Willis transition from blockbusters to cinematic duds?   -   Copyright  AP
By Shannon McDonagh  •  Updated: 30/03/2022

Bruce Willis is stepping away from acting after a diagnosis of aphasia, a condition that causes loss of the ability to understand or express speech, his family said Wednesday.

What follows is our article from February 14 2022.

On 8 February, the Razzie nominations were released to honour the worst of last year's Hollywood releases.

The Golden Raspberry Awards, as they are known by their formal title, recognise films ranging from moderately cringe-worthy to downright insulting (this year, Dear Evan Hansen and Space Jam: A New Legacy take pride of place.)

Actors are encouraged by their agents not to take the selections seriously, reassured that it’s all in good fun.

But a Razzie acknowledgment conceivably marks a stain on the stars' future prospects and Wikipedia pages.

Every so often members of the awarding organisation come up with one-off categories when an unignorably bad trend in film makes itself known to them.

In 2010, a time when cinemas were in the chokehold of new and unsatisfying technologies, they concocted ‘Worst Eye-Gouging Use Of 3D’ (awarded to M. Night Shyamalan’s take on ‘Avatar: The Last Airbender’).

When fart-humour was considered the peak of comedy twenty years ago, ‘Jackass: The Movie’ beat ‘Scooby Doo’ and Britney Spears’ ‘Crossroads’ to the award for ‘Most Flatulent Teen-Targeted Movie’.

For the first time in the awards’ 40-year history, the Razzies have decided one individual's filmography deserves its own category.

That actor is Bruce Willis. And disarmingly, he appears to have stopped caring.

Why is Bruce Willis making so many bad films?

It's unlikely that you’ve seen or heard of any of them. Until this news made headlines it’s safe to assume most people hadn’t, because the productions Bruce Willis does these days aren’t made to be seen.

All eight films are – to resurrect a 90s term – direct-to-video features that can be purchased, rather than distributed to cinemas, or even streaming services, from the point of release.

It's not unfair to suggest that most the actor's A-list contemporaries – the Damon's and DiCaprio's of the world – would consider putting that volume of films across half, or even an entire decade.

Preparation, shooting, and the promotional press cycle for a single project can take up the majority of a single year.

From sci-fi dystopias to mobster imitations, these efficiency of these productions is that they require the actor to do one thing and one thing only – be Bruce Willis.

Less of a reflection of his acting, which the world knows first-hand can be stellar, and more of a moment of despair for the terrible scripting and direction that surrounds him.

Rotten Tomatoes, the internet's cinema bible, scores films between 0 and 100 per cent through aggregating critical write ups from across print and digital media.

Over his 44-year career, Willis starred in five films that amassed scores of over 90 per cent – a testament to why he became one of American cinema's household names.

The site's ubiquitous presence in online film criticism since 2000 can make or break a movie. Users lean on it time and time again to guide their viewing choices.

Based on critics' reviews, Willis' eight movies released in 2021 received an average critical score 5 per cent.

Comprehensive data on this is hard to come by, but there is a high chance this makes Bruce Willis the worst-reviewed actor on the platform last year.

Numbers aren't everything – there are hundreds of poorly reviewed works on Rotten Tomatoes that are now considered cult classics or ahead of their time, but it derails the argument that this is some grand creative pursuit for him, a diversion from the high stakes of major film studios in favour of doing something meaningful.

Willis set himself apart from his 90s cohort with a distinct disinterest in award-chasing.

People took to his performances because he isn't the type of performer to wax lyrical about the immense emotional and physical sacrifices required to act. His preference for making films that pertain to his high-octane interests, rather than what reviewers would like to see him do, has always been evident.

'The Sixth Sense', 'Moonrise Kingdom', and 'Die Hard' are all films he enjoyed the idea of starring in.

In an appearance on prolific US interviewer Bobbie Wygant's NBC show in 1988, part of promotions for the latter's debut, Wygant tells him he has a surefire hit on his hands, querying if he'd be interested in doing more than one stint as the reluctant luminary of the film, John McClane.

A young Willis earnestly reveals his uncertainty about being typecast as an action hero.

"I really choose my films to satisfy myself. I don't really concern myself with what the audience wants. I think John McClane is the opposite of a superhero – I chose the part because of the dignity of this guy."

25 years later, a GQ cover story – affectionately titled ‘Bruce Almighty’ – used to promote the final ‘Die Hard’ film, refers to Willis’ filmography as “one of the weirdest bodies of work (in a good way) of any A-list actor in Hollywood”.

When asked for the best career advice he'd been given, he told the magazine: "You’ve got to do the hard stuff first." Do the big scene first, and then you can do the small scenes and have fun."

"It’s great advice for life. I say it to my kids: Do the hard stuff first. Then you can go and do whatever you want to do."

The mid-2010s mark a shift in Willis' approach to filmmaking

Every screen star has their duds, but the reception of even one of the films featured in ‘Worst Performance by Bruce Willis in a 2021 Movie’ would be career-destroying for most A-listers.

Colin Farrell took years to recover from the when 'Alexander' failed to make back its budget of $155 million, as did Nicholas Cage when his performance was ripped to shreds in 'The Wicker Man'.

But not Bruce. The world is due another eight 'direct-to-video' films from the actor this year.

Speculation is now rife within film circles on what drew him into starring in an enormously high volume of productions few people will ever see. Money troubles and a general discontentment, or disinterest, with the craft of acting have been tabled as possibilities by fans who feel his fall from grace (is it a fall from grace if the party concerned is aware of his actions?) came out of nowhere.

Did the Planet Hollywood founder descend into cultural stagnancy right underneath our noses?

American comedian Nikki Glasser described Willis as “the star of every DVD you kind of just…find on the street” at a Comedy Central Roast from 2018 that now reads as oddly prophetic.

Each line about the declining quality of Willis' films was intended as hyperbole. In the present, that is the only way we experience his output.

“Bruce, you keep making these f–cking bombs. Guess what? So does Kim Jong-un. But at least Kim is smart enough not to release his,” former athlete Dennis Rodman quipped.

His joke was met with boos from a suddenly protective audience who thought it went a step too far.

Like all good jokes, the grain of truth was present. Willis had been making appearances in smaller budget movies with no cinema release since the late 2000s, though at a much lower rate and in conjunction with his blockbuster output, which remained a priority.

The odd cameo appearance in a direct-to-video production requiring less than 15-minutes screen time didn't stop him from entering the following decade as the US' eighth highest-grossing box office star.

Willis' new experiment remained just that – an experiment. So under the radar it took us years to notice that it became his personal brand, slowly, and then at a dizzying speed.

Whatever film ends up winning this one man low-budget film factory's special category at the Razzies likely makes no difference to him. There are heists to be had, murders that need avenging, galaxies to save.

The best conclusion we can reach at this juncture, without needing any kind of sixth sense, is that he is fulfilling his long-term philosophy of doing precisely what he wants.