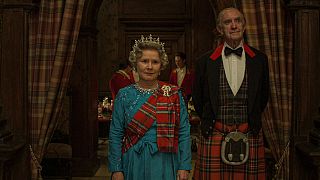 Imelda Staunton as Queen Elizabeth II (left) and Jonathan Pryce as Prince Philip, Duke of Edinburgh (right) in The Crown, Season 5.   -   Copyright  Netflix
The opinions expressed in this article are those of the author and do not represent in any way the editorial position of Euronews.
By Jonny Walfisz  •  Updated: 09/11/2022

It’s finally here. The most anticipated series of Netflix’s hit UK royal drama ‘The Crown’ lands on the platform tonight.

The fifth series of the silver-spooned soap comes with a brand new cast and enters the 90s for the first time, a tumultuous period for Britain’s royal family.

Created by Peter Morgan in 2016, The Crown documents the monumental time during which Elizabeth II sat on the British throne. The series is famous for its lavish set design, witty dialogue, and the devastating insight into how heavy the head that wears the crown is.

The new series will cover the late Queen’s annus horribilis, which refers to the year of familial strife when, in 1992, three of her children’s marriages publicly fell apart and one of her favourite castles nearly burnt down.

Just because you sit on a golden throne decorated with jewels stolen from ex-colonies, doesn’t mean you can’t have a bad year. Or that it won’t make excellent television.

After two series each for Claire Foy and Olivia Coleman in the starring role, they move aside for Imelda Staunton’s turn as Elizabeth II.

Best known for her terrifying depiction of evil headmistress Dolores Umbridge in the Harry Potter series, Staunton will no doubt carry this series with equal regal magnitude.

Before you flick over to your closest Netflix-optimised device, here’s a roundup of all the major stories that have made this the most anticipated series of the show yet.

You may have heard that the focal point of the series, Queen Elizabeth II, is no longer with us.

The UK promptly went into an undignified meltdown over this. The insane queues to see the Queen’s coffin and the suspension of just about every public service for the week building to her funeral was probably proof to showrunner Morgan that his next series would be a hit.

With the death of one monarch comes the ascension of another. Prince Charles became King Charles III overnight and suddenly the character the show has most often given a less-than-positive portrayal is the new monarch.

Supporters of the royals have questioned how the new monarch will be depicted in the series which will show the dissolution of his marriage to the people’s princess, Diana.

Some royalists have even gone so far to say it’s not acceptable to portray the sitting monarch negatively at all.

Unfortunately for them, much of the now-King’s conduct is already publicly known, such as the 1989 tapes, where Charles was caught wishing he was the now Queen Consort’s tampon.

While I have only scorn for all royalist bootlickers, especially prudish ones, tampongate is actually kind of kinky and romantic.

Royalists also have taken issue with depictions of Charles hurling abuse at Diana, which will have been dramatised because… it’s a drama series.

Because apparently royalists have no imagination, they have been readily demanding that the show makes it clearer to audiences that the lines written by writers aren’t verbatim closed-door truths.

One of the biggest moments in the upcoming series that has royalists clamouring for the fictional depiction disclaimer is a scene where Charles tells Sir John Major that his mother should abdicate.

The moment is controversial enough that Major put out a press release: “There was never any discussion between Sir John and the then Prince of Wales about any possible abdication of the late Queen Elizabeth II.”

That’s still not enough for the royalists though, which include Dame Judi Dench, who has requested the fabled disclaimer.

“The time has come for Netflix to reconsider - for the sake of a family and a nation so recently bereaved, as a mark of respect to a sovereign who served her people so dutifully for 70 years, and to preserve its reputation in the eyes of its British subscribers,” Dench said.

Throwing some sense into the matter is this series’ Princess Anne actor, Claudia Harrison, warning “patronise an audience at your peril.”

Depictions of controversial events abound in the new series, and some people wish they weren’t shown.

One of the main ones drawing ire is an event that was first seen when it was televised by the BBC itself: the Martin Bashir interview with Diana, where the princess told the world about her affair, the breakdown of her marriage to Charles and her mental health. These elements will feature in the seventh episode of the series.

Last year, the controversial interview was reappraised when Bashir was found to have broken journalist guidelines to convince Diana to do the interview. Diana’s children, Prince William and Prince Harry both believed the interview contributed to their mother’s deteriorating mental health.

Which unlikely places are cashing in on location shooting?