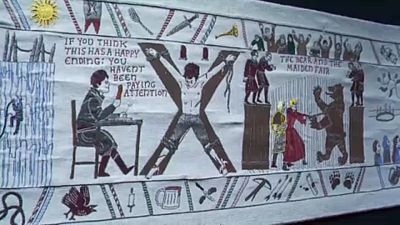 An exhibition featuring a tapestry inspired by the hit television series Game of Thrones has opened in Bayeux, in France's Normandy region.

At almost 90 metres in length, the artwork was created in Northern Ireland with its material sourced from one of the last surviving mills in the country. Around 30 local stitchers spent a total of 1,500 hours to make it.

Kathryn Thomson, the director of the National Museum of Northern Ireland, hopes the tapestry will attract younger generations to learn about the region's history and cultural traditions.

Before travelling to France, the tapestry was displayed at the Ulster Museum in Belfast, which Thomson said "attracted many young people" to the museum as well as international visitors.

Northern Ireland was also one of the main filming locations for the series.

"Last year, 1 in 6 visitors to Northern Ireland came because they had an interest in Game of Thrones. They visited some of the locations spending nearly €60 million in the economy of Northern Ireland," he said.

"When people think of "Lord of the Rings" they often associate it with New Zealand and the last film in that series came out 16 years ago, yet it's still driving tourism to New Zealand today. We believe Game of Thrones will have the exact same effect on tourism to Northern Ireland."

The Game of Thrones tapestry will be displayed at the Hôtel du Doyen in Bayeux until December 31.