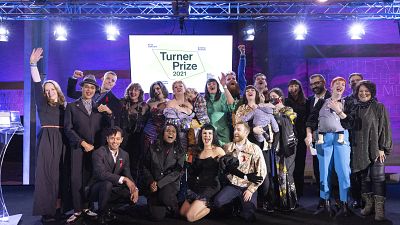 The prestigious Turner Prize for art has gone to a Northern Irish collective which aims to transcend the country’s historical religious and political divides.

The 11-person Array Collective from Belfast won the £25,000 prize money on Wednesday, for "The Druithaib's Ball," a recreation of a traditional Irish shebeen, or speakeasy. They are the first Northern Irish winners of one of the art world’s most highly regarded prizes.

The work is full of references to 100-years of Northern Ireland history, including papier-mâché models, funny costumes, and a large pink poster saying "Stop Ruining Everything".

The group said they will put the winnings towards finding a permanent studio in Belfast, where redevelopment is making finding and renting space more difficult.

"So it's really motivated us and it's pushed [us] and it's changed maybe how we work."

Fellow artist Stephan Millar added that the group are proud of their Belfast roots.

"The Sibin [the pub installation] was for everyone of Belfast but it's also for all the collectives in this room. We see you, we support you. We're with you."

The announcement was made at a ceremony at Coventry Cathedral, in partnership with Tate and Coventry UK City of Culture 2021. The Turner Prize exhibition is being held at the Herbert Art Gallery & Museum in Coventry as a highlight of its City of Culture year.

Turner Prize through the years

For the first time this year, all of those shortlisted, Array Collective, Black Obsidian Sound System, Cooking Sections, Gentle/Radical and Project Art Works, were collectives or artist-run projects. All of the nominees were commended for their community work and social engagement.

Prize organisers said the Array Collective's work tackles "urgent social and political issues affecting Northern Ireland with humour, seriousness and beauty," but the Turner Prize has not always been so rooted in reality.

But it has also been criticised for rewarding impenetrable conceptual work and often sparks debate about the value of modern art.

In 2019, all four finalists were declared winners after they refused to compete against one another. Last year's prize was canceled because of the coronavirus pandemic.

This year, all five finalists were collectives rather than individual artists.